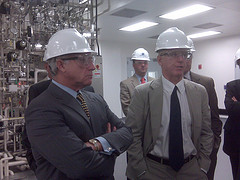 The facility is an amazing state-of-the-art plant and has been built to allow further expansion of capacity over time. Governor Dean was enthralled at the engineering involved and very much enjoyed learning about the manufacturing processes. Seeing the investment first hand deepened his appreciation of the need to have a sufficient data exclusivity period in the bio-similar legislation.

Next we visited GlycoMimetics in Gaithersburg. CEO Rachel King and her staff explained how the company’s platform technology produces anti-inflammatory molecules, one of which is now in a Phase 2 clinical trial, for the treatment of sickle cell crisis – the painful result of vascular occlusion caused by the disease. Sickle cell anemia is a genetic disease prevalent in ethnic groups who trace their ancestry to subtropical areas where malaria is or was widespread. In individuals with one allele of the gene the sickle-shaped red blood cells protect against malaria, but those who inherit two alleles get the blood disease that causes the painful vascular occlusions and organ damage.

Approximately 180,000 African-Americans suffer from this disease which causes frequent, expensive hospitalizations and reduces lifespan to an average of 42 years in males and 48 years in females. As a physician, Governor Dean was fascinated by the scientific explanations about the disease and the potential treatment.

After the tour we met for lunch with Maryland biotech CEOs and Congressmen Chris Van Hollen (D, MD-8) and Elijah Cummings (D, MD-7). We had a great discussion about healthcare reform legislation and the need to maintain incentives for biotech innovation.
More on This Topic