The 14th annual BIO Asia International Conference kicked off Tuesday at the Grand Hyatt in Tokyo, Japan. President and CEO of BIO Jim Greenwood welcomed attendees, and mentioned that BIO Asia is BIO’s longest-running international conferences.  He thanked attendees for their continued support of the industry, and of the event.

Greenwood noted that the US and Japan share a similar set of healthcare challenges, and that innovators, investors, and institutions must come together to solve the problems of the modern world. He called for a long-term strategy for industry and government to work together and incentivize innovation to save lives, save money, and ensure a prosperous future across the world.

BIO then welcomed Dr. Tatsumi Yamazaki, Chairman of the Steering Committee of the Japan Bioindustry Association (JBA). Dr. Yamazaki greeted attendees and gave an overview of the event and JBA’s role in growing the industry. He noted that there remain gaps between industry and academia that hinder innovation, but that meetings such as this one are important to overcoming such gaps. 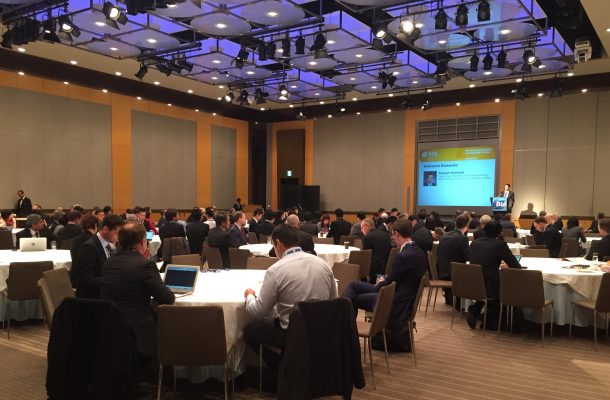 BIO and JBA were pleased to welcome the conference’s opening plenary speaker, Parliamentary Vice-Minister of Health, Labour, and Welfare Seishi Baba. Vice-Minister Baba displayed a slide showing the demographic changes in Japan since the baby boom and the projected population demographic changes through 2060. Japan is going to be a nation with an extremely high elderly population, which will present new healthcare challenges. Japan has a universal healthcare policy, and thus healthcare will continue to be a growing budgetary challenge as healthcare needs rise. To be sustainable, Baba explained, it is important that Japan promote disease prevention policies and encourage medical innovation in the area of healthcare.

Baba went on to highlight the strengths and weaknesses of Japan’s current healthcare landscape. Japan has many world class biomedical advances in universities and research institutions, and clinical research is widely practiced in hospitals in Japan. Additionally, Japan has many promising companies with advanced manufacturing technologies, and the approval process of drugs and medical devices has been accelerated. One weakness is that there are relatively few entrepreneurs, and so it can be difficult to assemble sufficient human resources for biotech ventures. Also, venture capital investment is scarce and finding seed capital is a particular challenge. Venture companies are not considered in the medical devices, and there are very few successful cases of medical device ventures in Japan.

Baba affirmed Japan’s commitment to overcoming these challenges and acknowledged the importance of smart regulation that will encourage innovation and reduce barriers to collaboration between government, industry, and academia. 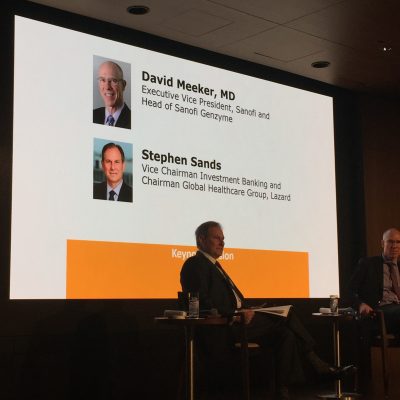 Tuesday’s keynote session welcomed David Meeker, MD, Executive Vice President, Sanofi and Head, Genzyme Sanofi. Meeker gave a candid discussion about orphan disease pricing policy and Genzyme’s role in developing drugs for orphan diseases. Meeker said Genzyme has held a presence in Japan since 1989 because they recognized the importance of the Japanese market, and that Genzyme was the first U.S. company to submit a drug through the Japanese regulatory process without the assistance of a Japanese partner.

Meeker said that regarding the content of proposed reforms under the Trump administration, Meeker’s hope is that the FDA will continue to receive funding and government support, because for biopharma companies, the stamp of approval from the FDA is a new medicine’s most valuable asset. He emphasized that he has zero interest in lowering the bar for demonstrating safety and efficacy. Meeker noted that it is important that high-risk investments for developing drugs for orphan diseases continue to be rewarded, at least in the initial phase before generics hit the market. He said there needs to be an elimination of the backlog of lifesaving drugs in development, and hopes that changes will be made towards this goal.

“People can choose to buy a car or not buy a car, but when it comes to buying lifesaving drugs, healthcare is different,” Meeker explained. “We need to be able to trust the system; I want to have the confidence that the medicine will do what it says it does, and that doctors will not be unduly influenced by any force within the system.” Meeker concluded that he is confident that companies with innovative therapies that meet unmet needs will be able to find reimbursement. 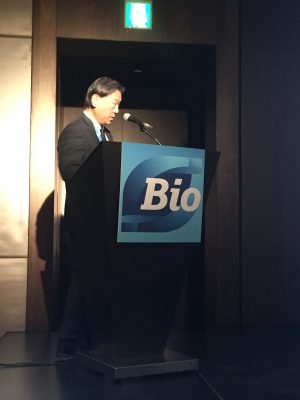 There is a worldwide discussion underway regarding the sustainability of traditional approaches to paying for healthcare, and Japan has recently announced plans to reconfigure reimbursement policies for medicines. The first panel session explored policy shifts underway in Japan in the context of policy shifts globally. Speakers provided advice on steps innovative drug companies should take to communicate the value they offer to patients and stay competitive despite changes in regulation.

Damond began by introducing Dr. Suzuki, who described the case of an innovative cancer drug, Opivo, for melanoma, and its effect on Japanese health care costs. Later, the drug’s indication was expanded to cover non-small cell lung cancer, drastically increasing the number of patients served under the drug, as well as the market size, from 3.1 billion yen to over 150 billion yen in about one year. Suzuki then outlines the future direction of drug pricing and the regulatory process for drugs in Japan, with potential adjustments in the frequency of price reviews. He expects to have a finalized plan by the end of the summer of 2017.

Damond then introduced Jackson, who discussed the policy changes Japan has taken in the past few years to foster innovation and increase access to new medicines. She said that there has been a sharp increase in drugs in the clinical development pipeline, as well as higher growth in R&D, since pro-innovation policy changes went into effect. However, she mentions that since December 2015, adjustments to government repricing rules that went into effect quickly and without significant, advanced discussion with stakeholders created concern among PhRMA’s member companies. This policy shift was followed by the emergency re-pricing of Opivo just a few months later, which was also done quickly. There is concern that without better communication between policy makers and medicine developers that significant therapies that could help patients and lower total healthcare costs might be prevented from reaching the market.  She concluded by expressing hope that Japanese policy makers will think very carefully about the implementation process of their proposed drug reform plan and that they roll it out in a way that doesn’t hinder serving patients.

The speakers then convened on the stage to discuss the reforms further. Dr. Suzuki stated that Japan has no intention to move away from pro-innovation policies, and reassured the audience that Japan will balance innovation with sustainable fiscal responsibility.

Williams described the successful joint venture, Viiv Healthcare, that GSK, Pfizer, and Shionogi support to deliver and improve HIV therapies.  Viiv produced 12 antiretroviral medicines for patients, with other therapies in development.  Williams also detailed GSK’s past asset swaps with Novartis and multiple partners in Asia, where GSK has about 1/3 of its global workforce and operations.

Fauchet and Bhuva then conversed about Fauchet’s two decades in Japan biopharma and lessons about GSK’s successful focus and growth during his tenure.  Bhuva congratulated Fauchet on his announced elevation to Chairman of GSK K.K. to take effect in April.  Fauchet thanked him and voiced the importance of public policies that support innovation in the development of new medicines as the best way to help the most patients, long-term, in a sustainable way.

Fighting Neurodegeneration: New Models for Alzheimer’s Disease and Beyond 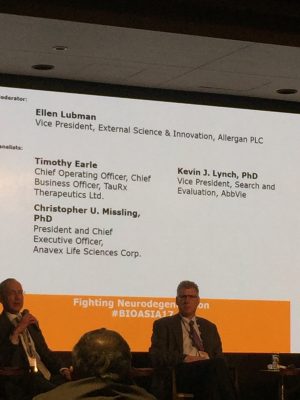 With more than 5 million people already suffering from neurodegenerative diseases in Japan, a number expected to rise nearly 50% in the next decade as the population ages, the challenge of finding treatments grows even more critical. Years of clinical trial disappointments have inspired a diversification in the selection of biological mechanisms to attack with new treatment approaches.

While the panelists represented different approaches to the treatment of Alzheimer’s, they were all in agreement that any new developments in the field serve to benefit all companies. A promising beta amyloid drug for treating the disease failed last year in phase III, and although this meant less competition for tau-focusedcompanies, it was a blow to the entire field. Panelists expressed disappointment as it meant that patients would have to wait longer for a new treatment, and the companies searching for a cure are all united in this shared goal.  This is especially true as the panel described that there is still much unknown about the proper timing when treatments might have greatest impact, and about what combination of mechanisms and genetic factors are most influential on disease progressions.  One hopeful part of the discussion pointed out advantages from cross-application of Alzheimer’s therapies to treat other neurological ailments and improvements in imaging that might support better neurodegenation diagnostics. 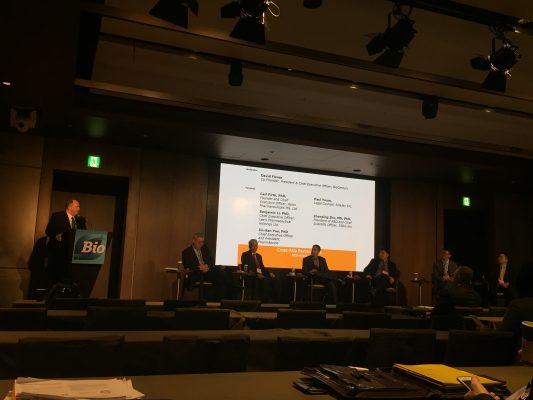 As biotech grows in Asia, innovators are increasingly looking for cross-Asia partnerships to access capital, talent and clinical trial sites to speed product development. In South Korea, several innovators have out-licensed local rights to emerging China players. At the same time, innovators elsewhere in Asia have partnered with South Korean firms to accelerate development of their own pipelines.

The panel examined several significant cross-Asia deals to identify lessons learned for Asia dealmakers, and was moderated by David Flores, President and Chief Executive Officer, BioCentury Inc. The panelists were:

Flores began by stating that he has been attending the conference for many years, and that the topic of cross-Asia dealmaking has been a popularly suggested topic but there was a lack of critical mass to profile and discuss until now. Data was shared on 17 significant deals totaling more than $11 billion of value among cross-Asia partners in the past 15 months.  Flores introduced the five panelists and provided some background into each company and their recent deal-making activities.

The panelists discussed what they are currently looking for when making deals, the differences in portfolio structures in Western and Asian countries, and the variances in the regulatory processes among different countries.  They generally agreed that they expect this trend now has gathered enough momentum to continue and spark robust cross-border dealmaking within Asia as the investor base continues to mature and find financial success from these pioneering deals.

Click here for additional coverage of Wednesday’s programming at the BIO Asia International Conference! Missed the event this year? Sign up to receive updates about BIO Asia 2018.