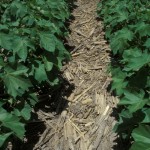 The Guardian reported on remarks by a UK government scientific adviser stating that organic farming could be worse for the climate than conventional farming methods, because of the greater land use required and the methods used.

Lord Krebs, who advises ministers on how to adapt to climate change, told the Oxford Farming Conference that organic farming did not necessarily mean more environmentally friendly farming.

Instead, he suggested, agricultural methods known as “no-till” – which usually involves the use of genetically modified crops or biotechnology, with herbicides to kill the weeds that tilling normally prevents – were better for the climate as they reduce the turnover of soils, a process that releases carbon dioxide into the atmosphere.

At least 10 percent of global greenhouse gas emissions are thought to come from agriculture, and that proportion is likely to rise as the world’s population grows and an increasingly prosperous middle class around the world opt for more meat in their diets, requiring a greater production of feed crops.

Krebs also argued that organic farming needs more land than technological methods to produce the same yield, which could be an increasing problem as the world’s population is projected to grow from more than 7 billion people today to 9 to 12 billion by mid-century, requiring a correspondingly large rise in agricultural productivity

Krebs, formerly the first chief executive of the UK’s Food Standards Agency from 2000 to 2005, said in 2000 organic vegetables were no more nutritious than those produced from other agricultural methods.

He told the BBC in that year that people who bought organic food were “not getting value for money, in my opinion and in the opinion of the Food Standards Agency, if they think they’re buying food with extra nutritional quality or extra safety. We don’t have the evidence to support those claims.”
More on This Topic