US Public Organizations Leading Genomic Research, with Europe and Asia Catching Up

June 24, 2014
Since before the mapping of the human genome just over a decade ago, we have been applying our growing understanding the genome and associated –omes to medical and industrial uses. Thanks to this understanding, we now have the ability to pinpoint a specific genetic variation in a specific patient which can predict sensitivity to certain drugs.

But where is innovation in genomics coming from? And where is it going? What roles are emerging markets playing? Are private organisations leading the charge? Analysis of patent filings offers insight into many of these questions and so we looked at patent applications filed around the world between from 2003 to 2013 in the areas of sequencing technology, personalised medicine and synthetic biology for our 2014 Life Sciences Report, which we are launching at this year’s BIO International Convention.

According to the research, personalised medicine and synthetic biology are showing real commercial promise, though public organisations outnumbered private organisations among the top filers of patent applications related to these fields. Meanwhile, in the more mature sequencing technology market, established private organisations outpace public entities, with past disruptive technologies such as next generation sequencing having become standard practice and new disruptive technologies emerging that can further challenge the status quo.

US public organisations file a particularly high number of patents in personalised medicine and synthetic biology, with the National Institutes of Health (NIH) the only organisation to feature among the top 10 assignees for patent applications in all three areas of technology. 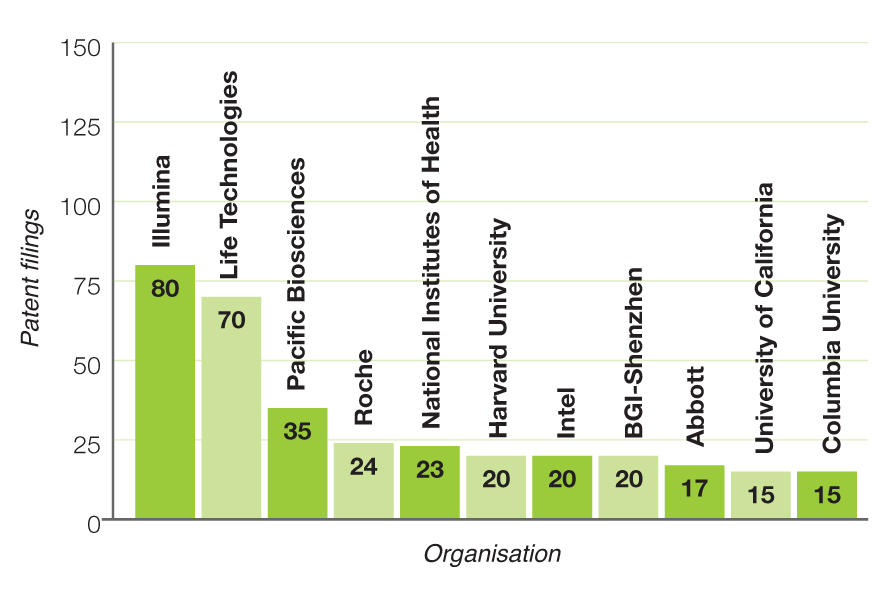 Oxford Nanopore Technologies began to protect their innovations with the first patent filings being made in 2009/10. Their technology allows the direct electronic analysis of single molecules and can be used to detect and/or sequence nucleic acids. The technology exploits biological nanopores and enzymes capable of ratcheting a single strand of nucleic acid through the nanopore enabling the identification of the bases as they pass through. Particular advantages of this approach include the ability to directly detect the individual nucleobases without the need for amplification procedures or fluorescent labelling.

BGI began to innovate in this area in 2007/08, according to our dataset and since then has amassed at least 20 patent families covering a range of methods and consumables for use in sequencing. Among its most recent patent filings are applications directed to new PCR sequencing methods which extend the capabilities of sequencers, methods of constructing digital gene expression profiling tag libraries (based on Illumina’s Solexa Single End sequencing platform), improved methods for nucleic acid identification and detection (using fragmented target nucleic acids amplified to create nucleic acid nanoballs) and consumable wash solutions for solving problems associated with the discordance rate and mapping yield in nucleic acid sequencing reactions.

Looking at the key territories for total patent applications filed, the US is a long way in front with a total of 2,871 publications since 2003. However, Europe and Japan feature strongly too with 739 and 520 publications respectively. China is yet to match these territories but this is perhaps not surprising given the fairly recent emergence of BGI Shenzhen. 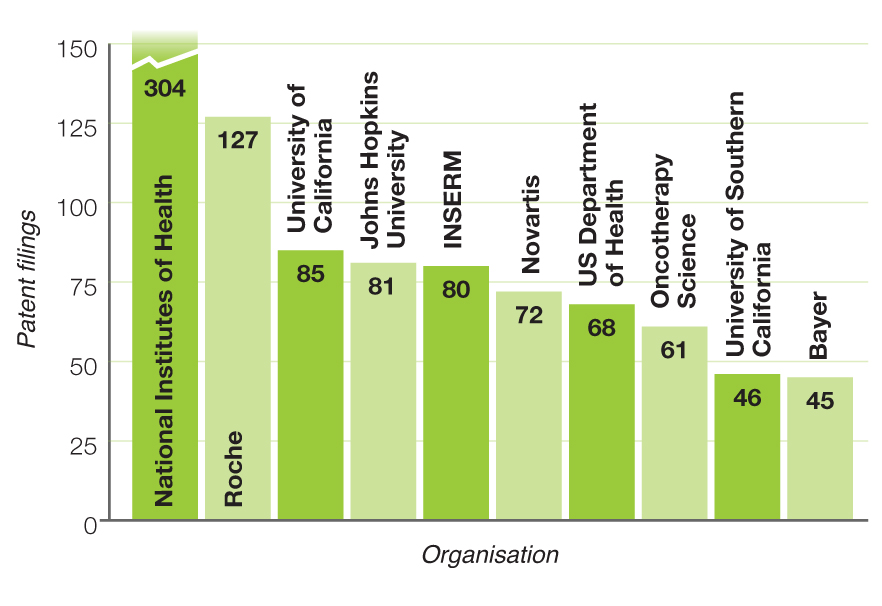 Since 2007 the EU has committed over €1 billion of research funding to personalised medicine through the Seventh Framework Program for Research and Technological Innovation. However, US public organisations are, at the moment, leading the way with research into personalised medicine. Of the top 22 applicants, over half are public bodies, and most of those are US research agencies, hospitals or universities.

While the number of patent families applied for by the leader, the NIH, has fallen over recent years, others – notably the French organisations the Centre National de la Recherche Scientifique (CNRS) and the Institut National de la Santé et de la Recherche Médicale (INSERM) – have become more active in the field.

Between 2003 and 2011 over half of each of the top five applicants’ patent families related to cancer. Given the number of types of cancers and the complex genetic aspects of the disease, and the recent regulatory approval of some drugs, such as Zelboraf®, being restricted to specific genotypes, this is unsurprising. 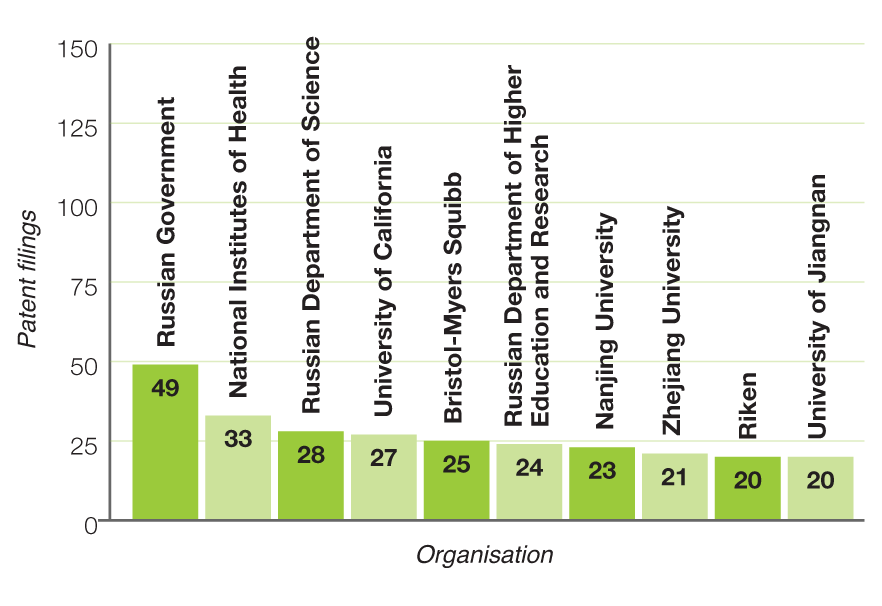 Synthetic biology is an emerging area of research, although arguably humans have been deliberately modifying genomes for at least ten thousand years, from the earliest domestication of plants and animals.

At first glance, the figures for patent applications in this area appear dramatically different from the other sub-sectors analysed in the report, with the Government of Russia topping the list of applicants (49 patent families) and the Russian Department of Science (28) and the Russian Department of Higher Education and Research (24) following closely behind. Similarly, Chinese universities and institutions are heavily represented in the rankings with for example Nanjing, Zhejiang, Jiangnan, Tsinghua, Chongqing, and Beijing Science and Technology Universities all featuring among the top 21 applicants in this area. However, these entities do not tend to file widely outside their home country. This strongly suggests reasons for filing other than simply protecting technology. For example, in Chinaacademics and inventors are assessed in part on the numbers of patent applications filed, with financial support available for making such submissions.