December 22, 2017
Scientists are sifting through 1,200 gigabytes of genetic data, taken from hundreds of Christmas trees all over the world, to figure out what separates the best needle-holders from the worst, writes Megan Molteni in Wired:

This year, for the first time in my life, I’ll be hosting my family for the holidays. And to their deep disgruntlement, we’ll be celebrating it without a Christmas tree. No, this isn’t some principled stance against the yuletide-industrial complex or a personal front in the war on Christmas. I’m just much more interested in an indoor evergreen interloper when its needles fall in someone else’s home. Now, under careful watch and watering, most firs, spruces, and pines can keep their fragrant greenery for weeks, if not months. Someone like me, who excels at neither of those things, needs a tree that can hold on to its needles – and its dignity – without an ounce of effort in upkeep.

Too much to ask, you say? Maybe a decade ago. But with today’s sequencing and computational biology tools, you may never get stuck with a sad Charlie Brown specimen again. In fact, at this very moment, scientists are sifting through 1,200 gigabytes of genetic data, taken from hundreds of Christmas trees growing all over the world, to figure out what separates the best needle-holders from the worst. They’re also looking for the genetic signals that confer resistance to devastating molds from the genus Phytophtora, Greek for “plant destroyer.” Although some fungicides can reduce its severity, the root rot still costs the US Christmas tree industry hundreds of millions of dollars each year. 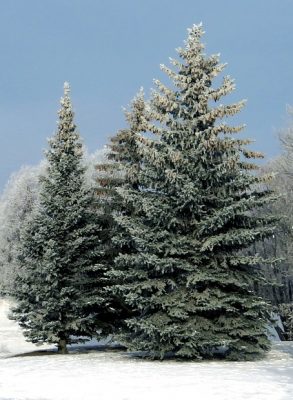 Unlike America’s other commercial crops, very little is known about what goes on inside a Christmas tree’s genome. For centuries growers have had to rely only on traditional methods of selecting and breeding for desirable traits. But soon, thanks to a small cadre of scientists who’ve dedicated their careers to unraveling the conifers’ secrets, they’ll be able to use genetics to make a more perfect Christmas tree. One maybe even I would want in my apartment.

Gary Chastagner has spent every fall since 1978 running reconnaissance at Christmas tree plantations, pop-up retail lots, and big-box stores across the country. At each stop, the plant pathologist scours the inventory, finding the best-looking tree in the whole place. Then he takes photos, interrogates salespeople, and snips away small branches, which he weighs with a portable scale before airfreighting them back to Puyallup, for testing at his Washington State University lab.

In the old days, that meant having an army of grad students marking a 2-inch segment on each branch and counting every needle or needle scar in that area. Today, Chastagner’s team hangs the branches on racks or wire clotheslines strung across a temperature-controlled concrete cistern, where they rest without water for seven to 10 days. Then, a few well-trained technicians gently rub each branch and rate the needle retention on a scale of one (1 percent of needles fall off) to seven (91 to 100 percent loss).

Chastagner is only interested in the extremes on both sides of the spectrum. Over the years, he’s taken any cuttings that rate zero to one, or six to seven and grafted little bits of them onto rootstocks his lab manages on 15 acres in Puyallup. This process converts each outlying specimen into an isolated stand of genetically identical trees, preserving their unique DNA in what’s called a clonal holding block.

Now, those trees are part of a massive effort to pinpoint the tiny genetic variations that determine why some trees turn out better than others. Five years ago, Chastagner and his research partners at North Carolina State University landed $1.3 million from the U.S. Department of Agriculture – the largest Christmas tree grant in U.S. history – to use RNA, which translates DNA into proteins, to figure out which genes are turned on or off in trees with valuable traits. And in a little more than a month, they’ll finally have those answers.

That’s how long Jill Wegrzyn, a computational biologist at the University of Connecticut, expects it will take to analyze all the sequencing data – five years’ worth, collected by Chastagner and his collaborator at NCSU, John Frampton. “We have our list of genes we’re looking at to see if they are being up or downregulated,” says Wegrzyn. “Now we’re connecting them together, to see how they form different networks and pathways of gene expression. Which is not super easy for conifers.” 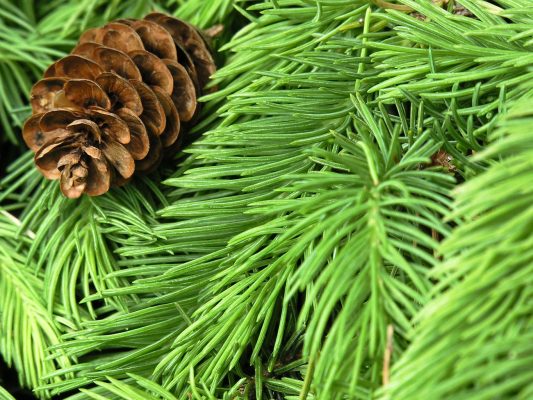 That’s because the conifer genome is not just enormous – 20 billion base pairs compared to your 3 billion – but also pretty weird. At some point in their deep past, spruces, pines, firs, and their relatives acquired a complete second set of genes. Scientists think this genome-wide duplication likely helped shape these species into the tallest, hardiest plants in the world. But it’s also made sequencing them an incredibly daunting challenge. And unlike corn and soybean, there hasn’t been much money available to even try. So far scientists have managed to put together partial DNA blueprints for only a handful of conifers, not including the most popular Christmas tree species.

Chastagner isn’t after anything so grand. What he cares about is what’s going on in a special layer of cells, right where the needle meets the branch. Gene expression here controls whether or not these cells break open, causing the tree to release its needles. So his team scraped those cells out of hundreds of branches, at 10, 20 and 30 days post-harvest. Then they froze the tissue in liquid nitrogen and sent them off to North Carolina to be extracted for RNA sequencing.

Each sample is like a snapshot of all the genes being turned on and off as needles are lost. Chastagner’s colleagues at NCSU sent in samples taken from the roots of trees, to see how gene expression in different trees changed in response to fungal infections. Now it’s Wegrzyn’s job to sort through them all to look for genetic signatures that correspond to needle retention and phytophtora resistance.

The goal, at the end of all this, is to find a molecular biomarker for needle retention. So that Christmas tree growers can separate the strong, stoic ones from the rest of the pack much sooner. It takes a year or two to grow a viable seedling in a nursery and another six to eight before you can tell if it’s a good one – that is, if it survives the rampant root rot. With biomarkers, growers could test much earlier, only planting trees that will keep their needles post-harvest. And it could help breeders cross in resistance traits from more exotic species to more traditional American ones.

This doesn’t mean Christmas trees are going GMHo-ho-ho anytime soon, though. Attempts to genetically engineer designer trees – for super fragrance, or bioluminescence, say – have never really gotten off the ground. And even with new work into conifer genetics, there’s still not enough knowledge to make the trees good candidates for today’s newer gene editing technologies. “The potential for genetic improvement in these species is huge,” says Chastagner. “But the reality is that the application of those improvements using genetic engineering will be hampered by their complexity – that just slows everything down.”

So it may be a while before I can buy the perfect, vacuum-free Christmas tree. On the other hand, it might take me that long to convince my family to let me host another holiday.