April 24, 2013
With industry data and numbers, results are always a mixed bag, says David Thomas, BIO’s Director of Industry Research & Analysis - and the latest on venture capital trends is no exception.

In the U.S., biotech VC funding is flat, and start-up money is drying up.
According to the National Venture Capital Association (NCVA), U.S. VC funding for biotech fell to $4.1 billion in 2012 (figure 1). 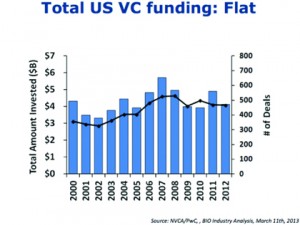 Although the 2012 numbers are down, biotech VC investment has been in a range of $4-5 billion per year since 2008. This is lower than pre financial crisis levels of 2007 when biotech firms took in $5.7 billion, but certainly has not fallen off a clif 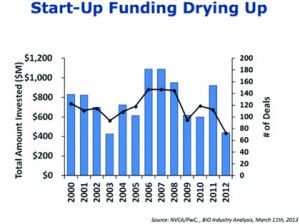 What looks like it might be falling off a cliff, however, is first-time financings for start-ups. From the NVCA’s report on seed funding and Series A financing received by a company for the first time, it looks like capital is drying up (figure 2).  New lows in the number of deals and total amount invested were seen in 2012. In fact, only 73 companies were started, a 17-year low 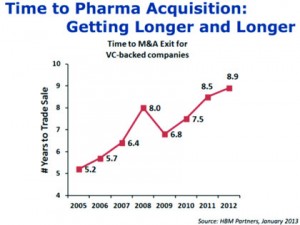 Longer time to acquisition.
It’s taking longer for VC-backed companies in the U.S., Canada and Europe and to get purchased-almost 9 years in 2012 compared to 5 years in 2005, according to HBM Partners of Switzerland (figure 3). That’s problematic for venture capitalists who are competing with other sectors, such as information technology, that have shorter timelines to acquisition. In biotech, a number of factors play into this rise-including increasingly long clinical development timelines and low success rates. The consolidation in the industry of larger pharma and biotech companies hasn’t helped either, as there are now fewer buyers, Thomas says

One hint of bright spot ahead: with recent efforts by the U.S. Food and Drug Administration to get drugs to patients faster, when those drugs are not just targeted to a specific protein or gene in the body but also geared for a specific population, we could see more and bigger VC investments in biotech companies taking these faster tracks. 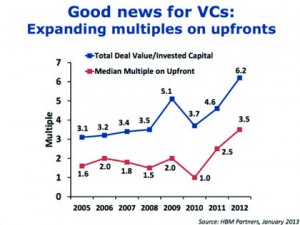 Expanding returns from VC-backed trade sales.According to 2012 merger and acquisition data from HBM, investors received 3.5 times their investment upon exit, in upfront payments alone (figure 4).  This is a record, and huge improvement over the less than 2-fold return seen on upfront payments from 2005 to 2007. “This might be the beginning of enticing more VCs to get off the sidelines and come back to biotech,” Thomas says 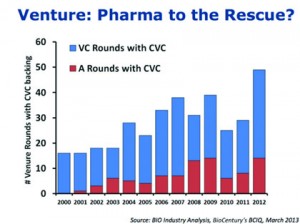 Corporate participation in earlystage financing at a record high.
According to Thomas’ analysis of BioCentury data, 49 venture rounds were backed by pharma VC in 2012 (figure 5).  Analyzing 4,000 venture rounds over the past 13 years, it’s become clear that pharma VCs are moving to early-stage financing, with 25% of financings in 2012 at the preclinical and Series A level.

That’s a good thing for nascent start-ups, as corporate VCs provide a lot of help on their boards, and have many connections to potential buyers, Thomas says. This might add value to the buyout as well: with pharma VCs making private investments in biotech, the return was 4.3 times the initial investment upon exit-compared to 3.5 for companies not backed by corporate VC.

The take-away:
VC trends are mixed, but pointing toward positive for the last few years. “The reality is that there is a small group of specialty VCs that will always be financing the new creative ideas,” Thomas says. However, there are only so many of them. That leaves many start-up ideas out in the cold, or in the lab freezer, waiting for the day when more riskaverse dollars flow back into the sector.

On a more positive note, “with the market going up to all-time highs, it’s bound to trickle down to biotech,” Thomas says.
More on This Topic