December 16, 2015
Voting is now open! See the 20 nominees and cast your vote once per day in the Buzz of BIO contest. Don't forget to register for the BIO CEO & Investor Conference; early bird discounts end December 17. 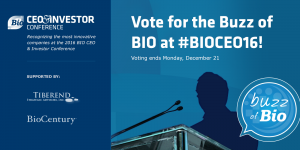 Each winner will receive a complimentary registration and presentation in the corresponding presentation track. Cast your vote today!