September 3, 2015
In late April 2015, Chipotle announced they were removing genetically engineered crops (called GMOs) from their menu. Well, kind of... Here is a fairly long list of responses to the Chipotle decision that show how the company is only partly removing GMO ingredients from its menu. In light of this announcement, Dr. Andrew Kniss, Associate Professor of Weed Ecology & Management in the Department of Plant Sciences at the University of Wyoming, looked into how Chipotle’s decision to move away from GMOs would impact pesticide use in his post here:

The figure below from weedscience.org (annotations in the plot regarding Chipotle are mine) shows the number of herbicide resistant weed species to these (and other) herbicides: 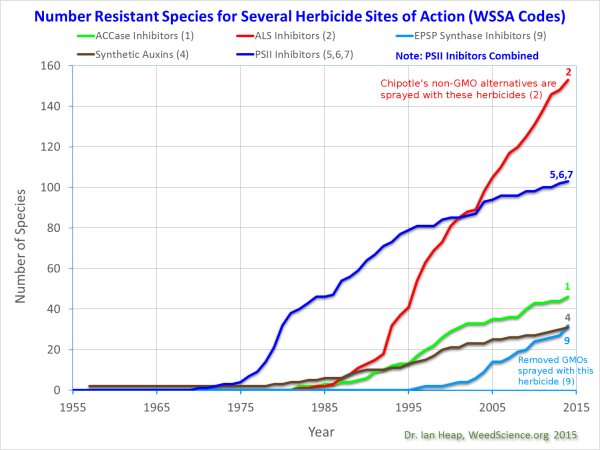 Herbicides used in the non-GMO alternatives chosen by Chipotle have indeed contributed to more herbicide resistant weeds than the herbicides used in GMO crops. It is pretty clear that if “superweeds” are really a problem Chipotle wants to solve, this is a pretty strange direction to take.

I’ve seen several suggestions that switching from GMO to non-GMO crops would result in an increase in pesticide use, or require the use of more toxic pesticides.


“But Chipotle isn’t sourcing ingredients that are herbicide (or other pesticide) free. The non-GMO crop alternatives they are using have almost certainly been sprayed with pesticides…I haven’t been able to find an analysis that really provides details on what Chipotle’s switch to non-GMO crops really means with respect to pesticide use.

"So my evenings for the last couple weeks have been spent looking up information about pesticides used in corn, soybean, and sunflower…Although it is impossible to determine exactly which pesticides would be used in the non-GMO crop fields where Chipotle is sourcing their ingredients." The information here should give some us a pretty good idea:

Corn - In the last couple years, over 85% of corn acreage in the US was planted to GMO hybrids. Two traits make up the vast majority of these GMO acres: (1) Bt, and (2) herbicide resistance. The herbicide-resistance traits allow farmers to spray glyphosate (the Roundup Ready trait) or glufosinate (the Liberty Link trait) on the crop to control a vast majority of the weeds in the field. So a switch to non-GMO corn will likely have impacts on both herbicide and insecticide use.

Corn – Insecticides - Widespread adoption of Bt corn in the US has reduced the population of this pest so dramatically that even non-Bt corn growers have benefited. So it is not a foregone conclusion that non-GMO corn would see an increase in insecticide use. All else being equal, though, it is likely that insecticide use would be somewhat greater in non-GMO corn fields.

Corn – herbicides - Although it is debatable how much insecticide use would increase with a shift from GMO to non-GMO corn, there is no doubt that there would be a major shift in corn herbicide use if switching from Roundup Ready (or Liberty Link) to non-GMO varieties…Ironically, 2,4-D and dicamba have been demonized by many anti-GMO activists and journalists (see "Agent Orange Corn"); but because they have a similar use pattern and control many economically damaging weeds, 2,4-D and dicamba will be among the herbicides most likely to be applied to Chipotle’s non-GMO corn.

Soybean & Sunflower Herbicides - There are no Bt soybean traits being grown in the US or Canada; the only GMO trait in this crop is herbicide resistance (again to glyphosate and glufosinate). Chipotle has stated that their primary shift was away from soybean oil to using sunflower oil (no GMO varieties of sunflower have been developed). This makes the comparison a little more tricky, since pesticide use in sunflower hasn’t been quantified by USDA-NASS since 1999, and this was before GMO soybean had reached a majority of US acreage…So if the switch away from GMO soybean to non-GMO sunflower was meant to eliminate use of glyphosate, it wouldn’t be completely successful. Although there would certainly be differences in the herbicides used in soybean and sunflower, based on the information I could find, it is difficult to make a case that one crop would be better or worse when it comes to the herbicide programs.

Soybean & Sunflower Insecticides - Since there are no insect resistance GMO traits in either of these crops in the US, it isn’t intuitive that the switch would have much impact on insecticide use…As luck would have it, North Dakota State University has been conducting periodic pesticide use surveys for a number of years, and they also happen to grow a significant number of acres of both soybean and sunflower. The pesticide use rates from the 2012 North Dakota survey support the earlier NASS data, with insecticide use being much more common in sunflower than soybean.

GMO Answers encourages you to read Dr. Kniss’ post in its entirety here: What does Chipotle’s switch to non-GMO ingredients mean for pesticide use?
More on This Topic