What’s Behind the Biotech IPO Boom?

December 13, 2013
Everyone knows that it’s been a knock-out year for the biotech sector in the public markets, which includes a large and well-performing IPO class. So far in 2013, 39 US-based companies have gone public, five European-based companies, and one Canadian company. Of these 45 IPOs, 42 companies have gone public on US stock exchanges. That’s over double the amount we saw in 2012. This year’s IPOs have also been successful at raising the amount of money (or more) that they filed for. In past years, companies have struggled with hitting fundraising goals.

What’s behind this banner year? We’ll be discussing that – as well as what to look for throughout 2014 – this February at the BIO CEO & Investor Forum in New York. 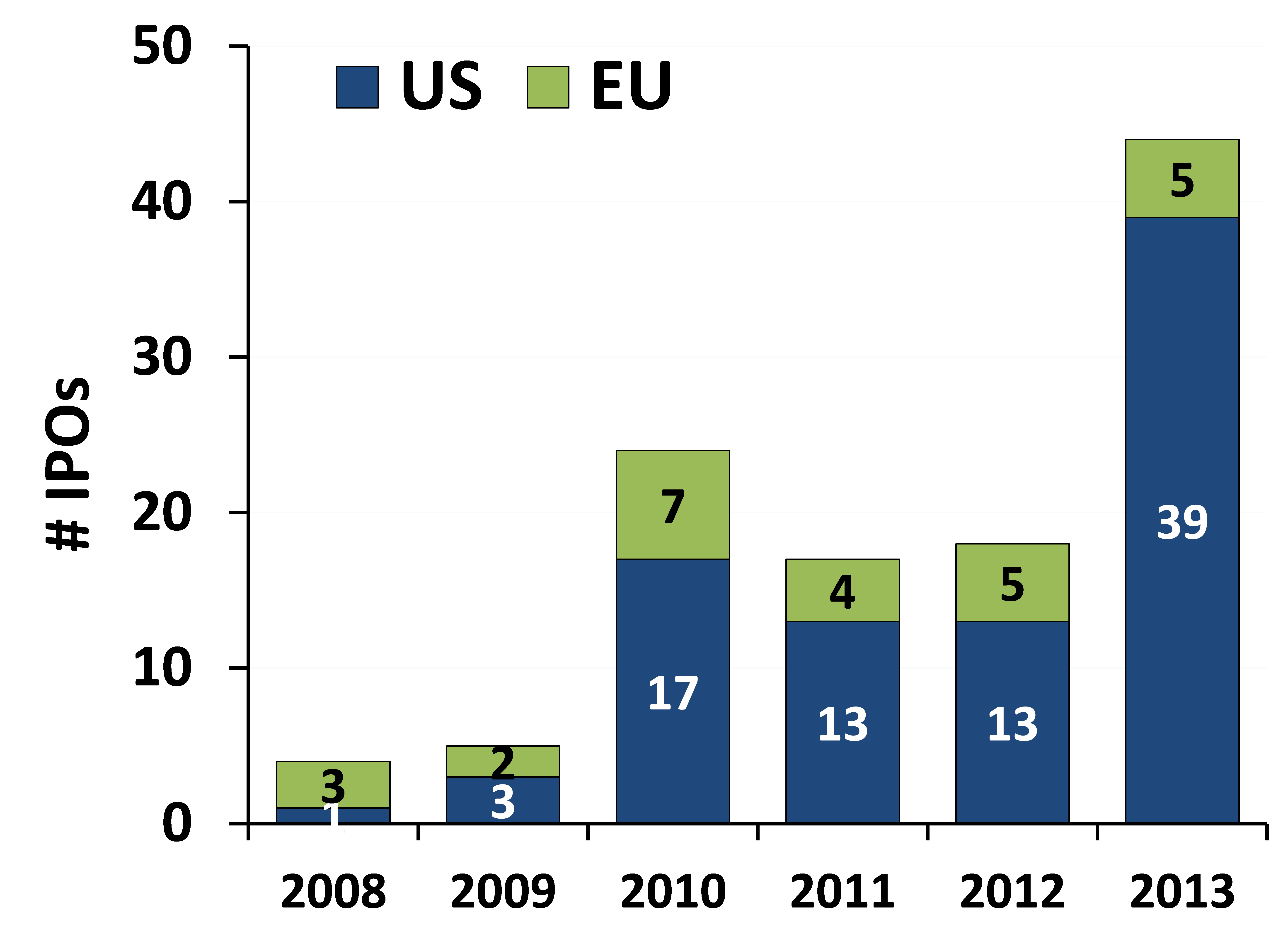 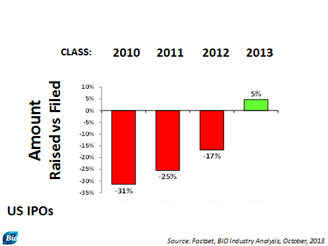 The great year hasn’t just been limited to companies looking to go public – in most cases, the investors backing them have seen strong initial returns. Here’s a chart looking at post-IPO performance for the past few years. For the most part, those companies which went public in 2012 and 2013 have been performing strongly. 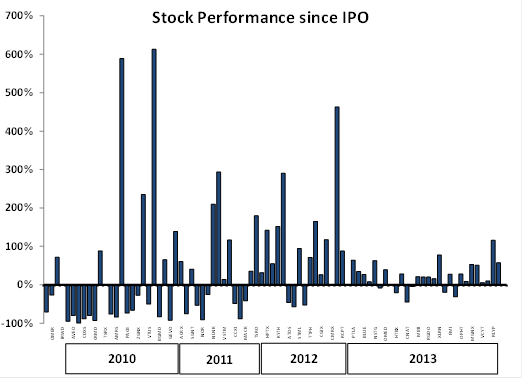 Another interesting aspect of the IPO's this year is that investors are becoming more comfortable with taking on additional risk by investing in pre-clinical and Phase I companies. We've seen five such IPOs this year, versus just two in 2012 and zero in 2011. 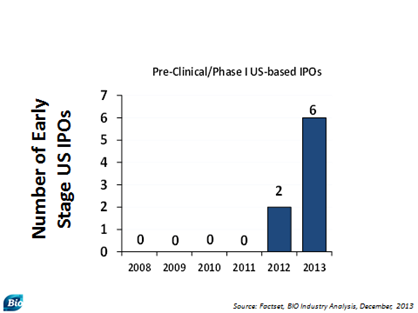 But it’s not just an IPO boom. Follow On Public Offers, in which companies offer an additional stock issue of supplementary shares, are also up significantly.

So why are public offerings doing so well? Several reasons come to mind, including the enactment of the JOBS Act, increased investor confidence in the regulatory environment for start-ups, and strong financial performance by larger biotech companies.

The Jump Start Our Business Startups (JOBS) Act was enacted in April 2012, and over 40 companies have since gone public using its provisions. The JOBS Act contains a host of provisions which make it easier for emerging companies to go public and raise capital in an IPO. One provision allows companies to conduct testing-the-waters meetings with investors prior to their roadshow, enabling potential investors to get relevant information about a company and conduct in-depth research to inform their investment decision. This also allows the company to gauge investor interest in the forthcoming IPO. The JOBS Act also provides regulatory relief to eligible companies for their first five years as a public company, including an exemption from requirements in the Sarbanes-Oxley Act (SOX) for external attestation of internal financial controls. These and other provisions of the JOBS Act have made it easier to go public, resulting in the uptick of IPOs this year.

Another part of the enthusiasm is due to the strong performance among established, large cap biotech companies, which have outperformed the S&P 500 by over two-fold this year. This performance has whet investor appetites for the sector, giving many companies the opportunity to go public.

Investors have also become more confident in the regulatory environment faced by biotech companies as a result of the enactment of PDUFA V. A key theme underlying PDUFA V is to improve communication and transparency in FDA’s regulatory processes to the benefit of patients and biomedical innovation.  FDA has made a concerted effort to engage in robust communication with drug developers at all phases of drug evaluation to minimize unnecessary delays during drug development and enhance the quality of submissions.  The PDUFA V technical agreement established a new review program for New Molecular Entity (NME) applications to promote transparency, accountability, and ultimately a higher first cycle approval rate.  Further, PDUFA V establishes a new program aimed at enhancing timely, interactive scientist-to-scientist communication during drug development by establishing a new liaison office to help drug developers engage with the Agency, and by establishing best practices for FDA-sponsor interaction during drug development. These changes mean that investors will better be able to judge the value and risk of treatments throughout the development and approval process.

Finally, we may be seeing a “catch-up” effect as companies that have previously been waiting on the sidelines are deciding to go public now given the high investor interest. Will this trend continue in 2014? How can companies looking to go public – and the investors interested in them – best take advantage of the current market opportunities? At the 2014 BIO CEO & Investor Conference these questions will be at the top of our agenda. Early bird registration ends in just a few days on December 16th – be sure to register soon to take advantage.