July 12, 2013
The public dialog surrounding the Renewable Fuel Standard is robust- and filled with misinformation. On July 11, Rep. Lee Terry and Rep. Bruce Braley held the third of a series of briefings, which focused on what is really happening with the so-called ‘Blend Wall.’ The briefing consisted of five speakers, including BIO’s own Brent Erickson, Executive Vice President of the Industrial and Environmental Section. 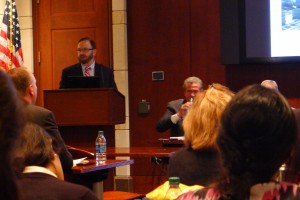 ng remarks were given by Tom Buis, CEO of Growth Energy. To begin the discussion, Mr. Buis discussed recurring rises in oil prices, and the pervasive notion that despite these rises we will continue to find more oil.

This of course is false.

We need renewable energy solutions to mitigate and eventually replace our dependence on dirty oil. This leaves us with the fundamental question: what is the future of fuel in America?

After posing this question, Mr. Buis went on to discuss a recent survey conducted by Fuels America which found that 75 percent of participants wanted more renewable fuel options at the gas station. Additionally, 3 in 5 blame the oil industry for high gas prices.

In order to provide this diversification to the American people, we need the Renewable Fuel Standard to open up the market to viable alternatives to oil, namely biofuels. This will not only support jobs for hundreds of thousands of Americans, but it will also drive down the price of gas at the pump and produce significantly fewer green house gases.

Currently, nearly all of the retail gas sold in the United States contains a 10 percent blend of ethanol (E-10). The RFS aims to roughly double the percentage of biofuels, but has been facing opposition from big oil companies. What is their excuse? Most claim that higher blends such as 15 percent (E-15) would have detrimental effects on vehicles and are simply not viable.  The remaining presenters spoke against this claim from their professional experiences.

First to discuss his experience with the so-called blend wall was Dr. Andy Randolph, of Richard Childress Racing (RCR).  He began by providing a bit of background on the ECR engines, which are used for the Chevrolet NASCAR sprint cup.

In 2008, the race cars of NASCAR were using a high octane fuel that has aromatic levels greater than 40 percent, i.e. they were highly carcinogenic.  Starting in 2011, the cars using ECR engines made the switch to E-15 fuel in order to lower their aromatic concentrations to less than 20 percent. In the years following this switch, Dr. Randolph has observed slight increases in engine power and reduced deposit buildup. They experienced a seamless transition to E-15 fuels in the ECR engines and have since accrued over 3 million miles in race condition with no incidents. So, where is this so-called blend-wall?

Following the presentation by Dr. Randolph was BIO’s very own Brent Erickson. Mr. Erickson argued on behalf of the RFS for continued innovation.  He began his presentation by highlighting the evolution of biorefinery technology that has already occurred; from conventional ethanol to cellulosic ethanol to green gasoline.

Today, this progress on cellulosic ethanol can be seen through its commercialization across the country by companies such as KiOR, INEOS Bio, Abengoa, DuPont and Chemtex/Beta Renewables, to name just a few. In order for continued innovation to occur, the RFS must remain in place to spur the development of new innovative fuel molecules.

Additionally, the RFS has already resulted in the creation of over 200 bio-refineries and over 400,000 jobs in rural America to date.  The term of the program provides certainty for investors while its flexibility ensures a reasonable path to compliance and cost savings for consumers. The alternative to these benefits is the continued rise in gas prices. To prevent this rise, we need to keep the RFS in place to allow more advanced biofuels to be created and commercialized.

Next to present was Bruce Vollan, from Midway Service Inc., Vollan Oil.  Midway Vollan Oil is a family-owned company in South Dakota that uses a 24 hour blender pump to provide not only E-10 and E-15 fuel to customers, but also E-30 and E-85 fuel. Mr. Vollan installed his blender pump in the fall of 2007 and within weeks of turning it on to produce E-20 fuel, the amount of gas he sold doubled.

The only thing that will sell gas is price, and by lowering the cost of fuel with this E-20 blend, Vollan Oil gained a competitive advantage over other traditional gas stations. In June 2012, after doing his due diligence with the EPA, Mr. Vollan took out the E-20 and replaced it with E-15. Within weeks, the E-15 became their #2 seller. Today, Midway Vollan Oil sells more than 3 million gallons a year at their small gas station, more than double of their sales prior to using the blender pump.

To Bruce Vollan, this was proof of what consumers want and they deserve the chance to choose at the pump. Unfortunately, this choice is still unavailable to the majority of American consumers due to retailers who are controlled by oil companies who don’t want to lose portions of their revenue to ethanol, despite its lower green house gas emissions levels.

The final presentation of the briefing was given by Bob Casper, President and Chief Commercial Officer of POET Ethanol Products. Mr. Casper began his presentation by discussing the current fuel distribution system for ethanol.  In addition to vast production capacity in the bio-refining industry, there is also a bulk transport system built for E-10 which can be used for higher blends (up to E88) without needing any changes. In order to accommodate E-15 fuels, any pump can be retrofitted for just $800.

So, according to Mr. Casper, the blend wall is not a constraint. Rather, the competitive threat of ethanol in a free and open market is causing incumbents to use regulations as barriers. The reality is that ethanol has a $1.70 per gallon advantage over oil. Additionally, MathPro Inc. examined the consumer savings of the RFS and found that $31 billion a year was being saved as a result of E-10. The use of E-15 in the market would cause refineries to lose another 5 percent of their profit to ethanol producers, although it would further consumer savings. The notion of a blend wall has stemmed from this economic threat, not an actual incapacity of E-15 use in vehicles, as all of these speakers demonstrated on various levels.
More on This Topic