April 27, 2012
As we celebrate Arbor Day 2012, I want to personally chew out any of the “activist” ilk whose agendas are so extreme, it results in destruction.  I’m talking about eco-terrorism, agri-terrorism, crop vandalism, etc. – basically, killing trees and plants. 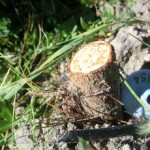 This destruction becomes especially horrific when it kills not only the plants and trees themselves, but holds back research and scientific progress aimed and healing, fueling and feeding the world.

Scion Chief Executive Dr. Warren Parker describes this as a blatant act of vandalism designed to end Scion's genetic modification research program. The company said damage to the trees, which occurred over the Easter Weekend, will cost around $400,000.

“As a Crown Research Institute, Scion has a responsibility to pursue areas of science and technology that offer opportunities for the forestry sector in New Zealand, including gene technologies. While this is a big blow to us and has set back our work some 12 months, we will not be deterred in carrying out our lawful research,” said Dr. Parker.

“The field trial was approved under one of the strictest regulatory regimes in the world, and our team has fully complied with the containment controls. Despite this, our research opponents were determined to stop us and used criminal means to do so,” Dr. Parker said.

Most of the trees were less than 1m high, and were part of two experiments due to run for two to three years.

Anti-biotech activists chopped down hundreds of papaya trees that were genetically engineered to resist the ringspot virus.  The ringspot virus all but wiped out Hawaii’s papaya industry in the 1990s, and the genetically modified fruit is credited with saving the state’s $11 million papaya production industry. 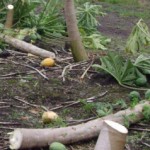 “It's hard to imagine anybody putting that much effort into doing something like that,” said Delan Perry, vice president of the Hawaii Papaya Industry Association. “It means somebody has to have passionate reason.”

Papaya grower Erlinda Bernardo says her family will plant again in another area after 3,000 trees worth tens of thousands of dollars were destroyed. “We're afraid to plant in that area, so we're giving up the lease there.  When you start all over again, you have to wait a year for the papaya to bear fruit.”

Last summer in Australia, three Greenpeace activists broke into a scientific farm near Canberra and destroyed a crop of genetically modified wheat. The farm belongs to the Commonwealth Scientific and Industrial Research Organization (CSIRO), the Australian national science agency, and the crop was part of research into developing genetically modified crop plants with enhanced nutritional value.

Suzanne Cory, president of the Australian Academy of Sciences, issued a statement in which she condemned the attack. “For an organization that claims to be dedicated to the protection of the environment, this is an unconscionable act,” she said.

The same week, The Farmers Guardian reported that masked attackers overpowered guards at two GM trial sites in the German state of Saxony-Anhalt, destroyed potato and wheat plants and caused damage worth hundreds of thousands of euros.

Vandalism of biotech crop trials became such a problem in the UK in recent years, that the government mandated that the trials be conducted in secret locations.

There’s been a lot written about these types of ag research attacks, and I have to agree with some who liken these efforts to the book burnings of the 1930s.   These fanatics say they are following some kind of guiding ideological principle, but what is principled about preventing new information and new science from seeing the light of day?

British professor Anthony Trewavas told The Economist that today’s global-food problems demand agricultural pragmatism and flexibility, not ideology. “If the crop trashers are so convinced they are right and have public support, they should identify themselves – and face a new trial. There, in front of the world, they can air their complaints and defend the need to destroy a trial that aims to put food in the mouths of hungry people.”
More on This Topic