When Food Companies Use Lies (and Children!) to Fool Consumers

January 29, 2018
The social media activity has been swift in response to Stonyfield Organic’s latest video advertisement that uses children to push their non-GMO agenda.

Sadly, bashing GMOs has become a marketing trend so common that I barely raise an eyebrow anymore when I see a commercial for Dole fruit bowls, Triscuits or even non-GMO water, salt, kitty litter or dry cleaning.

I think what makes Stonyfield’s latest campaign so appalling is the use of children.


“If you want to talk about GMOs, awesome. Find experts (and there’s no shortage of folks who can talk on genetic modification and biotechnology) to define the term. But do not use children. Don’t use children to perpetuate these myths and further demonize biotechnology, all in the name of selling your yogurt pouches.”

Still, the broader issue of deceptive advertising needs to be addressed. I wrote in this space about Chipotle’s “Food with Integrity” campaign and their commitment to go GMO-free while serving thousand-calorie burritos laced with E.coli. There’s no integrity in serving food that is unhealthy – and unsafe – while telling your customers lies about biotechnology, which has contributed to more than 460 million acres of sustainable farming systems around the world.

The same is true for Danone, the world largest yogurt maker (and former parent company of Stonyfield): It announced last year it was “committing to getting rid of GMOs” in its flagship brands to further support sustainable agriculture. Meanwhile, advancements like GMO technology have allowed farmers to use fewer pesticides and herbicides, fossil fuels, and water, and prevent the loss of soil to erosion.

Hats off to the dairy industry who has decided they want to shed some light on this alarming and misleading marketing strategy with their “Peel Back the Label” campaign. They point to an article in The Delaware News Journal by Kent Messer, a professor at the College of Agriculture and Natural Resources at the University of Delaware:


“This trend toward fear-based labeling may help prop up profits for food manufacturers, but it comes at a much greater cost for consumers who are trying to make informed choices for their families.”

But back to Stonyfield… On their Facebook Page, the company acknowledges the controversy created by their children’s video and says “we appreciate the importance of a constructive fact-based scientific debate.” Then it urges readers who want more info on GMOs to visit – WAIT FOR IT – The Just Label It website, which contains absolutely nothing “constructive,” “fact-based” or “scientific” whatsoever. For those who don’t know, Just Label It was created by Stonyfield Organic CEO Gary Hirshberg for the purposes of pushing a mandatory GMO label on food products in the interest of “consumer transparency.”

And before I start harping on the hypocrisy, let’s get a snapshot of some of the pushback Stonyfield is getting:


“You exploit the fact that the average parent is ignorant about how food is grown and the sciences behind it. You use children you've brainwashed to manipulate and spread fear.”

“It's hard to trust in the safety of food made by a company with such rigidly anti-science views. I mean, what's next? Will Stonyfield decide that bacteria are a myth and stop pasteurizing?”

“Offering choices is great, confusing customers with misinformation is NOT!”

“How about instead of using fear based marketing you actually try and be informative. You'd run into less problems.”

To all the Stonyfields, Chipotles, Danones (among others) out there, I leave you with this:  If you want to be organic or non-GMO, please do so. The American food market thrives on the principle of consumer choice. But don’t call organic or non-GMO healthier (it’s not) or more environmentally sustainable (it’s definitely not).

Feeding the world is a daunting task with real challenges that come in the form of droughts, floods, disease, insects, weeds and all those pesky regulations governing food production.  Everyone needs to work together – using a variety of tools and farming practices – and hopefully, with a little more integrity in the marketplace.

On its Facebook page, Stonyfield posted “we welcome the conversation and appreciate your taking the time to reach out,” and yet Stonyfield has reportedly blocked a tremendous amount of feedback. In response, a “Banned by Stonyfield” Facebook group has been created where these voices are engaged in a ongoing public dialogue on the issue. 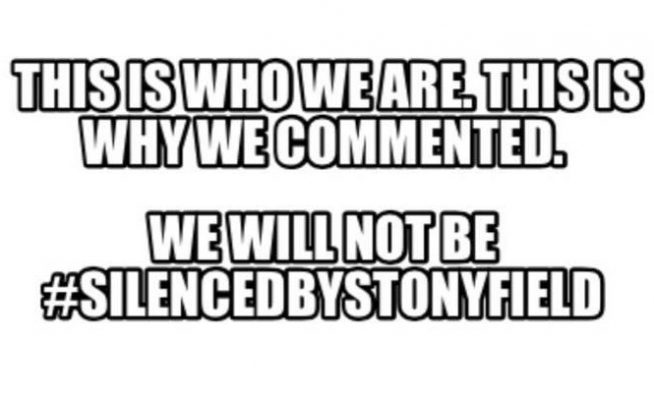