Where Flowers Bloom, So Does Mother's Day

May 11, 2018
Mother’s Day couldn’t be during a better time of year. The threat of snow is no longer, giving way to vibrant colors and fragrances stemming (pun intended) from revitalized plant life. Flowers are ripe for harvesting, making the perfect gift for moms around the world. In fact, next to Valentine’s Day, Mother’s Day is one of the most popular holidays to gift flowers.

We’ve covered how biotechnology, specifically genetic modification and gene editing, can enhance plants for human or animal consumption, but many probably don’t realize the role biotechnology can play in making sure we have plenty varieties of blooms for Mother’s Day arrangements.

The International Service for the Acquisition of Agri-Biotech Applications (ISAAA) has a page for the many ways biotechnology can improve some of the most popular ornamental flowers, including how some of the more popular flowers have been, or will be, enhanced through genetic modification. Whether it be for color, fragrance or plant architecture, biotechnology plays a key role in making sure we can grow flowers that any mother would love. 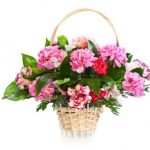 Carnation
To date, the “Moon” series from Suntory Limited and Florigene Pty Ltd are the only GM ornamental products commercialized on a significant scale. The Moon series carnations, containing various flower colors, have been commercially available in Australia, European Union, Japan and USA since the late 1990s while Colombia approved them in the early 2000s. In recent years, four new carnations were added to the “Moon” series namely: Moonpearl (lavender), Moonique (purple), Moonberry (light purple) and Moonvelvet (dark purple) carnations. These four recent events have been approved for commercial use in Malaysia in 2012. Carnations with longer vase life have been developed, but were not commercialized.

Chrysanthemum
Chrysanthemum is one of the most important ornamental plants in the world. Like rose and carnation, molecular breeding for the blue chrysanthemum is on-going. Then again, molecular technology has been widely used to improve other aspects of chrysanthemum. These include insect resistance, flower color modifications, abiotic stress resistance, pollination control and altered plant architectures achieved through various transformations techniques. Currently, there are no GM chrysanthemums commercially available yet. 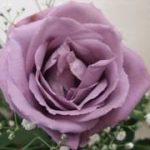 Roses
The most popular transgenic today is the blue rose. This transgenic rose contains three-genes: a synthetic RNA interference gene to shut off the DFR gene, a delphinidin gene from blue pansy, and another DFR gene from iris that had an affinity for producing delphinidin. Although the resulting rose is more lavender than blue, Suntory released the blue rose “APPLAUSE” in Tokyo, Japan in 2009. In November 2011, Suntory introduced the blue rose in North America.

Researchers in Suntory are now considering different approaches, including other bluing factors, for the development of a true blue rose. Fragrance is also a trait being researched on since most of the rose cultivars that came from Hybrid Tea roses have inadvertently lost their fragrance due to the selection, being more focused on vase life and flower form.

Petunia
Currently, the Petunia-CHS, an event with an altered flower color developed by Beijing University, is the lone petunia event commercially available. Ornamental Biosciences in Germany is now focusing on improved abiotic stress resistance, specifically frost tolerance. This would increase the range of environments in which this bedding plant could be grown.

Read the full piece to discover other ways biotechnology is improving ornamental plants, including a comprehensive table of the genes used in GM flowers and their resulting traits.
More on This Topic