December 16, 2011
With only two weeks to go in 2011 it is looking like a five year low for deals. The chart below shows therapeutic deals dropping every year since 2007.

We use the Windhover/Elsevier Strategic Transaction Database as our starting point for deal analytics. We analyze each deal to determine if the deal is for a drug asset, removing generic/OTC deals, manufacturing/service deals, device/diagnostics/tools deals, and tech transfer deals. What remains are deals for biotech company pipeline drugs, from discovery through regulatory filing, and approved, branded drugs. These deals reflect the collaborative funding and corporate partnering for biotech's in the drug space.

Table 1. Drug deals are down. 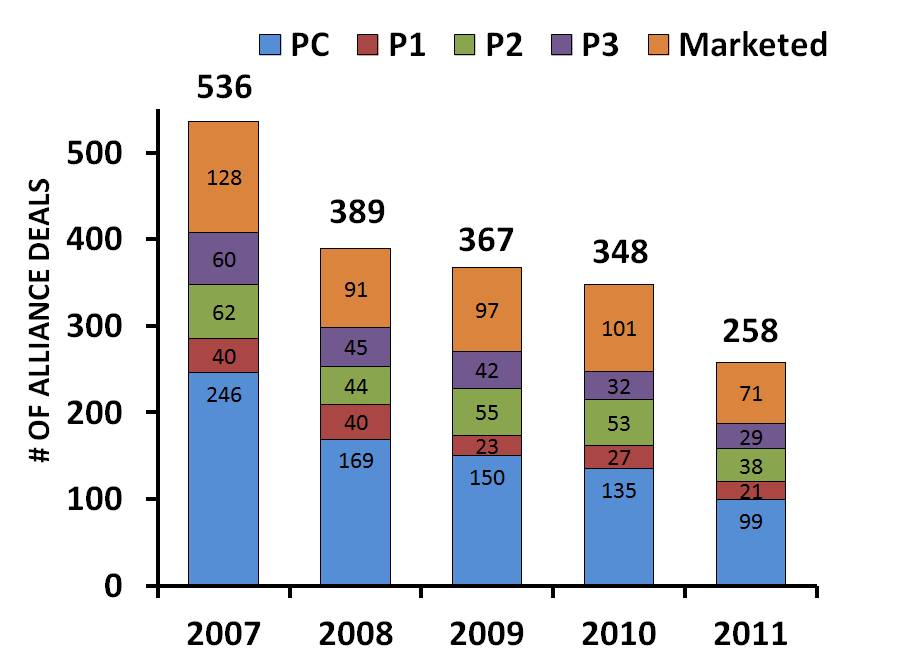 This data is in stark contrast to the number of meetings we see at our partnering events, and the discussions we hear from pharma executives. One on one meetings at the large BIO International Convention and BIO Europe conferences are still increasing at double digit growth rates year over year. Talk from pharmaceutical executives, as referenced in this WSJ story, continue to describe a widening of the deal net. So what is behind the divergence? Although there are fewer companies today vs. back in 2007, and more consolidation of "buy-side" licensees, can this really explain the magnitude of the drop? Perhaps we can dig into this a little deeper during the business roundtables at the upcoming BIO CEO Conference, February 13-14th in NYC.