As the head wrangler and ringleader for Hawaii Farmers & Ranchers United, an agriculture alliance based on Hawaii Island, it made sense to go and show support for Scott Enright; Hawaii’s Chair of the Department of Agriculture. It would have been remiss to pass up this opportunity to attend this annual convention full of Agriculture thought leaders. Due to the cost I had only planned on attending for one day but fate intervened and I had the pleasure of attending the full convention. Here is a handy tip for AgVocates, or for those without the budget to attend; ask a sponsor if they have any available passes.  Okay, so maybe not the conventional way to attend a National conference but it worked a sponsor had two passes which they graciously donated to Hawaii Farmers and Ranchers United, so an advocate/farmer and myself could attend the full convention. (Disclaimer; the Sponsor who gave me a pass is not the organization for whom I am writing this post. My blog post idea came after the convention.)

I had no clue what to expect at NASDA, as this was my first time attending, and I was slightly intimidated by the depth of the ag leaders attending and speaking.  My mission was to absorb and learn.  What and Who is NASDA aka The National Association of State Departments of Agriculture?

I found NASDA friendly, open and virtually everyone was willing to share their story and knowledge. The first day I had lunch with a representative from Coca-Cola. Who would have thought they would have a crop protection and sustainability director? My table had an eclectic group including the Coca-Cola man, a beekeeper with immense scientific knowledge, an organic farmer, and a lawyer. The next day I met the former President of the National Farmers Union who is currently in his second term as the appointed agriculture Director for Minnesota. This conversation provided insight into the Hawaii Farmers Union and their National policies which I’ve always found slightly confusing. Frankly, I still do not understand how an organization with a clear, inclusive policy at the National level operates with efficiency if their State Chapters dissent and misquote National policy. It’s quite possible that as a lifelong Farm Bureau member and supporter that I’m biased as to how The American Farm Bureau works. I appreciate how Farm Bureau delegate’s debate issues on the floor to set policies for all; it’s cleaner and more organized in my opinion. Agriculture is a global marketplace; good policies are comprehensive, sometimes complicated, and need to encompass a broad vision to prevent doing unintended harm. 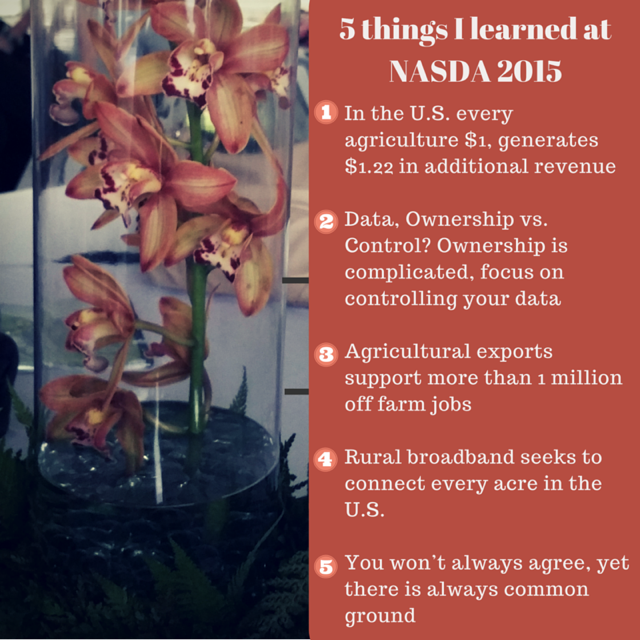 I attended the NASDA Annual Convention to learn and expand my knowledge. Here are my 6 steps to accomplishing my NASDA mission.


Chair Enright deserves special kudos for handling all of the weather related issues; I’ve never attended a convention that had to deal with so many in such a short period. Flooding is an understatement. Our “Night at the Palace” was spent sitting barefoot in 4” of water. Hulihe’e is one of two Royal Palaces on U.S. soil; normally a spectacular location only that night we were in the middle of a monsoon and flash flood. The amazing food was prepared by wonderful chefs in the biggest downpour I’ve ever seen in Kailua-Kona, and I’ve lived here since I was 12 years old. I’m astounded they even pulled it off. Despite the weather challenges NASDA faced this year in Kona, it was time well spent, and I’d go again.