Why State Food Labeling Mandates Are Bad For Consumers and Farmers

October 7, 2015
Hundreds of food and agri-business representatives are in Washington this week visiting with members of the Senate to talk about biotechnology, GMOs, and food labels.  Bob Stallman, president of the American Farm Bureau Federation, explains in The Hill why the Senate needs to act soon to pass a federal GMO food labeling bill:

There is a growing anxiety among American farmers, manufacturers and shoppers about confusing and expensive changes coming soon to store shelves unless the U.S. Senate acts quickly to preserve America’s food labeling system.  This is the message members of the Coalition for Safe Affordable Food will be spreading on Capitol Hill today as we urge Congress to pass a uniform, national food labeling standard this fall.

Despite overwhelming scientific consensus that genetically modified food is safe, a handful of activists think every food product that contains genetically modified ingredients requires a label.  These activists have gone to dozens of states to get these states to enact labeling laws that will mislead consumers into believing there is something wrong with food products that people use everyday

The first law, which will go into effect in July, is in Vermont, and requires companies that produce food containing GMO ingredients to label them.


We need something better than a quilt of 50 state rules governing our efficient food supply chain.

What we need is a science-based, consistent standard that upholds interstate commerce while protecting affordable food choices in the marketplace.  The Senate can deliver that by passing the Safe and Accurate Food Labeling Act, which passed by the House with a bipartisan 275-150 vote in July.  The bill would reaffirm the federal government’s role in food labeling and stop different state labeling laws that will be confusing to consumers and raise their food prices.

The bill doesn’t cut corners.  It would require the Food and Drug Administration (FDA) to review the safety of all new GMO plant varieties and preserve FDA authority to require a label if necessary.  But let’s be clear: There’s never been any such determination in the past, and it’s hard to see how food like that would be approved for sale in the first place.

Here’s another important point.  Consumers who want GMO-free food should have access to it, so the bill would create a national “GMO-free” program overseen by the U.S. Department of Agriculture that would inform consumers without disrupting our entire food supply chain.  That way, anyone who wants to buy GMO-free food can do that – and know the uniform standard is managed by the U.S. Department of Agriculture. 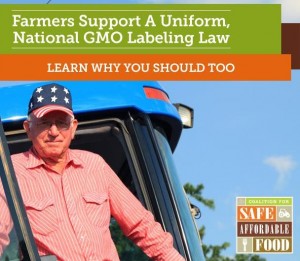 The push for mandatory state labeling comes with serious consequences for millions of Americans.  Under a patchwork of state labels, farmers, grain handlers, processors and distributors would have to segregate their crops, while manufacturers would have to reformulate and relabel products to comply with labeling requirements for every state.

Consumers, meanwhile, would pay for it all: One study from an economist at Cornell University found that state GMO labeling laws could increase grocery prices for a family of four by as much as $500 per year.


With each state passing unique labeling laws, consumers will be confused, not informed.

A food labeled as GMO in one state might be exempt from such a label in another.  All told, 26 states currently have pending some form of a GMO labeling law.  Each day the risk grows that our affordable and abundant food supply will be irreparably harmed by a patchwork of laws and regulations that stigmatize a safe food product.

Today more than 130 Americans from 21 states are visiting Capitol Hill and calling on the Senate to pass the Safe and Accurate Food Labeling Act this year.  These folks represent farmers, farm cooperatives and plant managers who will be on the front lines of the logistical mess that awaits if Congress fails to act.

It’s time for the Senate to pass legislation that creates a uniform, national food labeling standard.