Why Tom And Gisele's Diet Is Actually The Worst 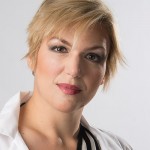 SciBabe Yvette D'Entremont writes a detailed report in Cosmopolitan about fad diets and misconceptions about health, nutrition and food safety.  Specifically, D'Entremont examines the diets of Tom Brady and Gisele Bundchen and reports on how eliminating sugar, flour, caffeine, and basically everything else from your diet will not make you look like a supermodel:

Who hasn't dreamed in vain of looking like Gisele Bündchen or Tom Brady? Now you can at least eat like them, as they have a personal chef/diet guru tending to their every last caloric need, and he dished to the Boston Globe last week the details of the genetically blessed couple's eating plan. Allen Campbell has designed the Brady-Bündchen diet to be plant-based, organic, gluten-free, GMO-free, sugar-free, caffeine-free, flour-free, pepper-free, mushroom-free, tomato-free, and dairy-free.

I don't recommend the pizza at the Brady household.

Campbell has managed to fit in every single piece of dietary insanity on the planet into one meal plan. It's borderline impressive how someone can cram so much non-scientifically based information, fear-mongering of healthy foods, and just plain old bullshit into one neatly tied, organically wrapped package. Yes, the diet may sound healthy, given that it's loaded up on fruits and vegetables. But it also cuts out so much food that it's composed of more air than fiber. Do you have to do all that to be healthy? Let's parse through this hodgepodge of dietary insanity.

Campbell told the Globe that he makes "conscious decisions to buy local and organic." What comes to mind when you see an organic label on a package? That the product can heal you of ailments that conventional ones caused? That a small farmer nurtured all the individual leaves into a state of health? That there's something magic in the organic farming that makes your food healthier?

Let's clear up a few things about "organic" products and agriculture.

Are conventionally grown crops in any way responsible for asthma, eczema, acne, cancer, or a variety of ailments that organic advocates claim that organic ranch-dipped gluten-free kale can heal? No.

Are organic foods a better source of nutrition? Nope.

What happens when you go organic? Mainly, your grocery bill goes up. You also have to deal with the pain-in-the-ass shoppers at Whole Foods, and your friends might start to think you're a pretentious jerk, all for food that's no healthier.

The difference between organic and conventional is mainly the types of pesticides that are allowed to be used. Were you under the impression that organic food was produced without pesticides? That's a common misconception from how organic proponents talk about their farming standards and not using synthetic pesticides, but pay careful attention to the language.

Have you noticed that organic produce is not advertised as "pesticide-free?" It's because they have to kill the bugs and weeds somehow, and it's not through happy thoughts and yoga.

The pesticides in organic farming are generally derived from natural sources. For example, bacillus thuringiensis may sound familiar because it's used in some genetically modified crops, but it's an all-natural bacteria. As shown in this video by an organic farmer, it's used and approved for organic gardening (and if it's fine for organic, you probably shouldn't worry too much when it's used in conventional farming). And rotenone, derived from the jicama plant, is an insecticide and a piscicide. It's much more toxic than the commonly demonized pesticide Round Up, linked to Parkinson's disease, and all natural.

But speaking of bacillus thuringiensis and Round Up, let's tackle another "unnatural ingredient" Campbell's banished from Tom and Gisele's diet: GMOs. Campbell won't use them, claiming it's an effort to "think about the future of the planet and the future of humans."

More accurately, It's probably because he's seen that picture of the tomato with the fish sticking out of it. 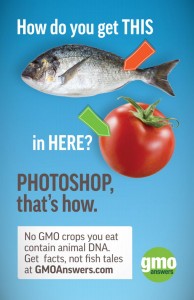 But what does a NON-GMO label tell you about the nutritional content of the food?  Not much.

Transgenic breeding, i.e. genetic modification, allows us to very precisely produce crops that can withstand diseases. Often people think this involves spraying an excess of pesticides and "dousing" crops with Round Up, but this demonstrates a drastic lack of understanding both about farming in general and why GMOs are used.

Because of GMOs, the Hawaiian papaya crop was modified to inoculate it from the ringspot virus, saving the Hawaiian papaya. In some cases, like golden rice, GMOs are used to modify plants to include life-saving nutrients. GM cotton and corn have drastically reduced spraying of certain pesticides and GM alfalfa allows us spray a much less toxic pesticide than we used to. These crops are rigorously tested for safety in ways that conventionally grown crops never have been, down to the very last gene.

So why the fuss about GMOs? Because people see the picture of the fish sticking out of the tomato. Or they think there's an evil scientist trying to destroy their kid's DNA. Or they watched a Netflix documentary and now they're obviously an expert on farming.

We do know one thing about people who arbitrarily choose not to eat GMOs. They've probably never been starving.