December 1, 2016
I was just starting my first year in the Pennsylvania General Assembly in 1981 when the Centers for Disease Control (CDC) released a troubling report describing a strange lung infection that had crippled the immune systems of five young men in Los Angeles. The CDC called it “pneumocystis pneumonia.”

As it turns out, these were the first officially recorded cases of the global AIDS epidemic.

By the time I left the statehouse for Congress in 1993, nearly half a million Americans had tested positive for the HIV virus, and AIDS had become the leading cause of death for Americans aged 25 to 44. That year, the release of the Oscar-winning film Philadelphia starring Tom Hanks and the Tony-winning play, Angels in America, helped to humanize those battling the disease and counter mass ignorance about how the virus was spread.

Those were dark days. But two years later came a major medical breakthrough: the biopharmaceutical industry released a new cocktail of drugs called protease inhibitors. The development of these highly active, anti-retroviral treatments (ART) would prove to be one of the most significant discoveries in the history of modern medicine.

As the new millennium dawned – and the United States began to get a handle on prevention and treatment strategies – the global epidemic was spiraling out of control. By 2002, HIV/AIDS was the fourth leading cause of death globally and the No. 1 killer, by far, in sub-Saharan African.  By 2016, the disease had claimed 35 million lives, making it one of the most lethal pandemics in history.

Yet despite these sobering numbers, it’s remarkable to consider how far we’ve come. Since 1995, the death rate for HIV/AIDS patients has fallen by 85 percent. An HIV-positive person in the United States taking ART is projected to have a full life expectancy, so long as they comply with their regimen and manage their condition. On a global scale, the CDC estimates that half of the nearly 37 million people living with HIV are now receiving medication to treat it. One million people began an ART regime in the last six months alone, according to a United Nations report issued last week. This is staggering progress. As UNAIDS executive director Michael Sidibe recently said: “Putting 15 million people on treatment in 15 years was a dream. Today, it’s a reality.”

Underlying these rapid advances in patient access has been the biopharmaceutical industry’s success in lowering the costs of HIV medicine through robust competition. Since the first AIDS cases back in 1981, nearly 40 medicines have been approved to treat HIV. Consider this: ART cost an average of $10,000 per person, per year in 2000. Today, the average annual cost of a first-line ART regimen is $100 per person, according to a Doctors without Borders report. While newer HIV medications remain inaccessible in many parts of the world, 94 active clinical trials are under way and 44 new medicines are in development to treat and prevent HIV/AIDS. This treatment pipeline suggests that ongoing competition and new product releases will continue to lower HIV drug costs as biomedical advances continue. 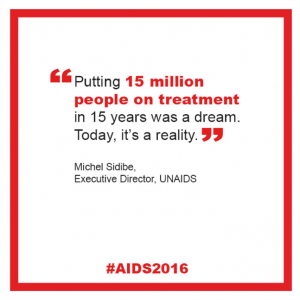 Today is World AIDS Day, a time to reflect on the progress made and the steps that remain to achieve a world without AIDS. It’s critically important that we acknowledge that progress does not equal victory. There is still an urgent need to raise money, combat stigma, increase awareness (wear a red ribbon), and broaden access to life-saving treatments.

Looking forward, there are many reasons to be hopeful.

Today, on World AIDS Day, I choose optimism. I’ve seen how far we’ve come since the onset of the epidemic – and in the 12 years since I left Congress to lead BIO and help steer an industry that has turned HIV from untreatable to beatable. In my heart of hearts, and in my children’s lifetime, I believe we will see the day when HIV/AIDS is no more.
More on This Topic