World Hunger is on the Rise - Biotech Can Help

September 20, 2017
A new report from the Food and Agriculture Organization of the United Nations (FAO) shows that world hunger is again on the rise after recent declines, affecting 815 million people in 2016 – 11 percent of the global population.

That increase amounts to 38 million more people going hungry than the year before, according to FAO, largely due to climate change effects and conflict around the world. The global economic slowdown has also contributed to this food insecurity.

As FAO reports, hundreds of millions of people are suffering due to lack of access to safe, nutritious food. As we work to alleviate food insecurity and adapt to climate change, agricultural biotechnology serves as an important tool in helping mitigate malnutrition and hunger.

One important biotech development is biofortification, which focuses on improving the nutritional quality of crops. Malnutrition is an issue not just when food is scarce, but when the food being consumed doesn’t have enough of the necessary vitamins and minerals. Iron, zinc, iodine, folic acid and vitamin A deficiencies are some of the most common, and almost half the world’s population suffers from one or more of these deficiencies. Biofortified crops currently being tested include Golden Rice and golden bananas, both of which can help alleviate vitamin A deficiency, which kills 650,000-750,000 children every year. 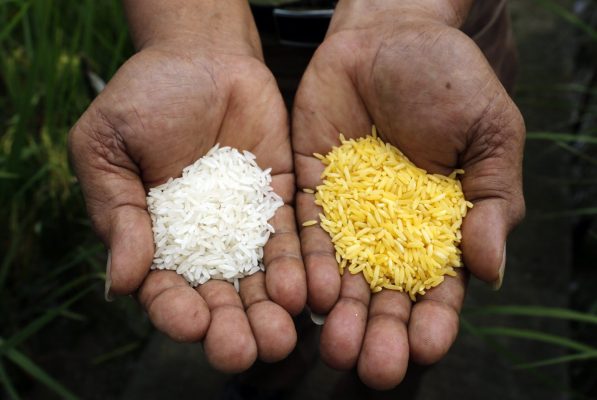 Technological advances like drought-resistant crops, corn and rice among them, can help combat the severe droughts that have swept Africa and other parts of the world in recent years, causing massive famines. While the worst droughts will continue to do damage, biotech crop varieties that can survive with less water can help, especially in areas where crops are completely rain-fed. Just as biotechnology has helped farmers fight pests, it can help them fight drought – aiding in the fight against famine.

Scientists in Uganda are also using biotechnology to fight banana wilt, a bacterial disease that has wiped out significant portions of the banana crop in Uganda and neighboring countries; at its peak in 2007, the disease caused 67 percent loss of Uganda’s plantations. For a nation reliant on bananas as a staple crop – the food comprises more than 30 percent of Ugandans’ daily calorie intake – that sort of loss proves devastating. GM bananas hold great promise in combating the disease.

World hunger is complex, and there is no silver bullet; however, biotech serves as a critical tool in fighting against it. As FAO notes, “In order to produce food in a sustainable way for an additional 2 billion people by 2050, a business-as-usual approach will not be sufficient.” Biotech can help.