Worldwide Orphan Drug Market to Grow to $127 Billion by 2018

April 23, 2013
The 2013 Orphan Drug Report from Evaluate, which launched today at the 2013 BIO international Convention, sheds light on the market dynamics of orphan drugs — pharmaceutical products aimed at rare diseases or disorders — projecting that sales will experience a compound annual growth rate of 7.4 percent between 2012 and 2018, nearly double that of the prescription drug market, excluding generics.  The report based on EvaluatePharma® data found that the worldwide orphan drug market is set to reach $127 billion by 2018, doubling that of the overall prescription drug market.

The National Organization for Rare Disorders (NORD) currently estimates 30 million Americans suffer from 7,000 rare diseases. Prior to the Orphan Drug Act of 1983, legislation that financially incentivized the development of orphan drugs, only 38 orphan drugs were approved. Since then, 425 indication designations covering 347 drugs have been approved. An interesting paradox of the success of the original 1983 Orphan Drug legislation is that it was assumed common diseases were economically incentivized unlike rare diseases. But the findings of this report prompt us to question whether the development of drugs for large-disease populations is worth the high cost for Big Pharma, making us wonder: Might a ‘Common Disease Drug Act’ redress the imbalance? 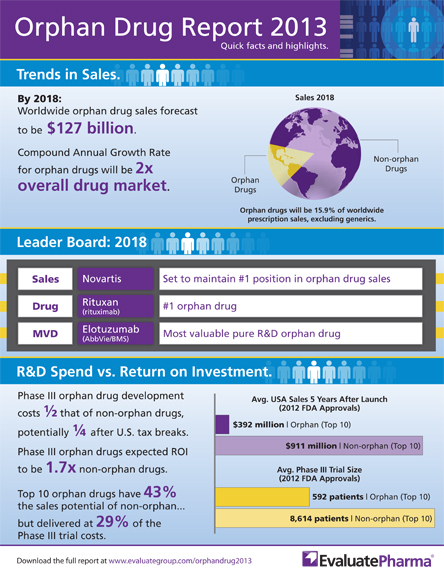 Here’s a look at some of the report’s key findings:

Anthony Raeside is Evaluate's Head of Research.
More on This Topic