"The U.S. food industry is fighting one of its fiercest regulatory battles in years over labels for ingredients made with genetically modified organisms. And it is losing—to Vermont.

"The country’s first law requiring mandatory GMO labels is slated to go into effect in Vermont on July 1 after an industry-backed federal law that would block states’ authority stalled in the U.S. Senate last week, wrote Annie Gasparro and Jacob Bunge, The Wall Street Journal."

In their piece, GMO Labeling Law Roils Food Companies, Gasparro and Bunge detail how complying with Vermont’s food labeling law is costing companies more and the effects it will have on farmers, food producers, retailers and consumers. Here is the rest of the article in its entirety with key highlights in bold:


...Facing fines up to $1,000 a day per product, food makers from giants like General Mills Inc. to regional businesses like Vermont Fresh Pasta are making big adjustments, many of which extend beyond the state’s borders.

Vermont is a tiny market for most companies, but the integrated nature of supply chains gives it an outsize effect. On Friday, General Mills said it is slapping GMO labels on its packaged food nationwide, saying it would be too complex and expensive to create a separate distribution network for the 626,000-person state of Vermont.

The maker of Cheerios and Lucky Charms remains firm in its stance against mandatory labeling, but “having one system for Vermont and one for everywhere else is untenable,” said Jeff Harmening, General Mills’ chief operating officer of U.S. retail.

Some companies, fearing such labels will be a sort of scarlet letter and scare off consumers, are replacing ingredients altogether. Vermont Fresh Pasta, which touts its fresh, local fare, said it has swapped out canola oil, which typically contains GMOs, for olive oil, which has no genetically modified version. 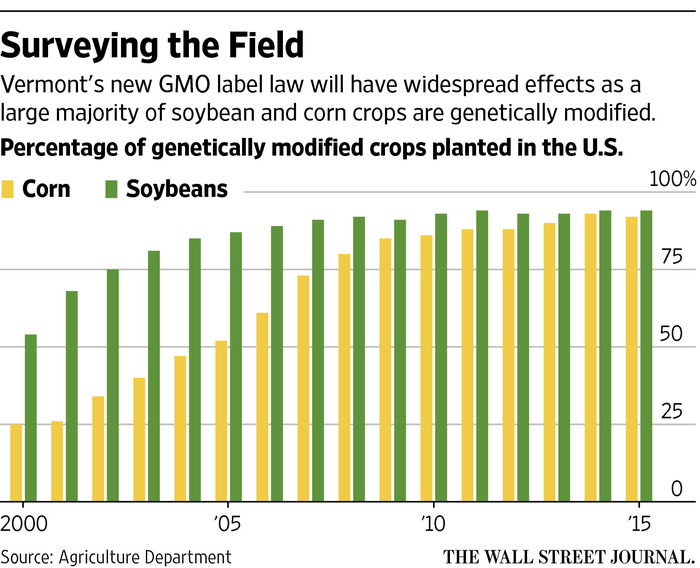 Freedom Foods LLC, a maker of organic and gluten-free products based in Randolph, Vt., has stripped GMOs from the granolas and cookies it makes for Vermont grocery stores, said owner Cathy Bacon. An out-of-state food company, whose products are made locally by Freedom Foods, has postponed selling in Vermont over concerns about complying with the law, she said.

Other businesses appear confused about whether they need to use special labels.

Food is exempt from labeling in Vermont if it is a direct animal product like meat and eggs, is certified as non-GMO, if none of the ingredients have a genetically modified version, or if the GMO ingredients make up less than 0.9% of the product’s weight.

Blue Valley Gourmet founder Christine Sawyer said she’s still unsure if she’ll have to label her fruit spreads. Some contain soy lecithin, typically a GMO ingredient, but it may be in a small enough quantity that they’re exempt.

Others aren’t sure whether the Vermont law applies to all of their products containing GMOs.

That is because any foods regulated by the U.S. Department of Agriculture—including processed foods containing meat that makes up at least 2% of their weight—are also exempt from Vermont’s state law. So Campbell Soup Co.’s canned SpaghettiOs would need special labels in Vermont but the SpaghettiOs with meatball won’t. That is confusing, says the soup maker, which has also decided to voluntarily label its GMOs nationwide.

The office of Vermont Attorney General William Sorrell, which is responsible for enforcing the state law, has been deluged with questions. Its website now warns that the office won’t reply to email inquiries about GMO labeling and asks companies to stop calling.

“We’re just simply not in a position to answer every single hypothetical question that comes in,” said Mr. Sorrell.

GMOs include crops whose genes have been engineered to make them resistant to pests, able to withstand herbicides, and otherwise hardier. Federal regulators have approved the GMO seeds on the market. Critics say they can hurt the environment and rely on herbicides that could harm consumers.

The federal bill stalled amid lawmakers’ disagreements over disclosure requirements, but negotiations are expected to continue, in hopes of bringing the legislation back to the Senate floor later.

Meanwhile, companies are preparing for the Vermont law—which can be a lengthy, complicated, and expensive process.

Grocery chain Price Chopper, owned by Golub Corp., has decided to keep the GMO ingredients in its store-brand products and said it would use special labels for foods like cornflakes and ice cream. But it is also busy making sure its suppliers are compliant and calculating how much product it will have to restock come July in its 15 Vermont stores, compared with its 120 other locations.

“There’s cost at every level,” a spokeswoman said, adding that price increases are inevitable.

In many cases GMO ingredients are difficult to substitute. Only a handful of crops grown in the U.S. are genetically modified, but of the prominent ones—corn, soybeans, canola and sugar beets—more than 90% are a GMO variety. The Grocery Manufacturers Association, an industry trade group, estimates that 70% to 80% of packaged food in the U.S. contain GMOs through ingredients like high-fructose corn syrup or soy lecithin.

Vermont institution Ben & Jerry’s Homemade Inc., which is part of Unilever PLC, decided to remove GMOs from its ice cream in response to consumer pressure before the state law passed.

It took about three years just to remove GMOs from ingredients like cookie dough and caramel, and the new products averaged 11% higher in price.

Blue Valley’s Ms. Sawyer said that in addition to cost, “sourcing new ingredients is so time-consuming.” Rather than add GMO labels or search for alternative ingredients, “I will probably just discontinue those flavors.”