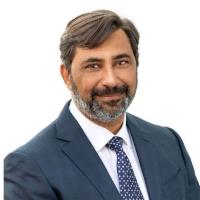 VINCERX, CEO AND CHAIRMAN OF THE BOARD OF DIRECTORS
Ahmed Hamdy, MD is the Chief Executive Officer and Chairman of the board of directors of Vincerx. Dr Hamdy has served as Vincerx’s Chief Executive Officer and as a member Vincerx’s board of directors since March 2019. Before that, Dr Hamdy co-founded Acerta Pharma, a pharmaceutical development company and member of the AstraZeneca plc, and served as its head of early clinical development from January 2015 to June 2019, as chief executive officer from February 2013 to January 2015, as chief medical officer from February 2013 to January 2015 and as a member of the board from February 2013 to February 2016. Before that, Dr Hamdy served as chief medical officer of Pharmacyclics LLC, a biopharmaceutical company, from March 2008 to June 2011. Dr Hamdy has served as a clinical advisor and member of the board of directors of Andes Biotechnologies, a nucleic acid-based drug discovery and development company, since September 2016, as a member of the Dean’s Council of the Jack Baskin School of Engineering at the University of California, Santa Cruz, since April 2019, and as a member of the Palo Alto Medical Foundation President’s Council since March 2016.

Dr Hamdy received a MBBCH from the KasrAlainy School of Medicine at the University of Cairo, Egypt.
Speaking In
2:00 PM - 3:00 PM (EST)
Tuesday, February 16