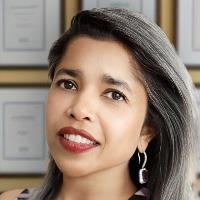 Deepa joined Delphi in 2001 to build and lead the firm’s biotechnology investment practice which focuses on drug discovery and development platform technologies that have resulted in multiple novel drugs, including six that are commercially marketed.

Prior to joining Delphi, Deepa was a Vice President in the healthcare group at J.P. Morgan where she was involved in several large healthcare M&A transactions and led public offerings for biotechnology companies that raised over $9 billion. Prior to that, she was a biotechnology research analyst at Genesis Merchant Group. She worked as a postdoctoral scientist in the Immunology Department at Genentech Corporation from 1993 to 1997.

She serves as Vice-Chair of the San Francisco Conservatory of Music’s Board of Trustees.

Deepa received her Ph.D. and MS from Wake Forest University and her MSc and BSc from the University of Bombay.
Speaking In
3:00 PM - 3:45 PM (EDT)
Monday, June 14

In the current environment, nascent biotech companies can raise funding from a variety of…