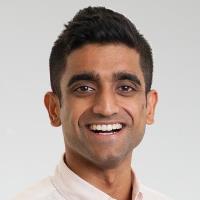 Previously Zavain was an investor at Eric Schmidt’s Innovation Endeavors. There he sourced and led the firm’s investments in early stage technology companies including Zymergen and BlockStream. Zavain drafted the firm’s theses in Genetics, Synthetic Biology, and the Blockchain.

Prior to VC, Zavain was a founder and computer scientist. At Discovery Engine (acquired by Twitter), he engineered machine learning and AI systems across a proprietary distributed computing framework to build web scale-ranking algorithms. Zavain was also a cofounder of Fountainhop, one of the first hyper-local social networks.

Zavain holds a BS in symbolic systems and an MS in computer science from Stanford where he was a researcher in Stanford’s AI Lab. He is currently a Lecturer at Stanford and has taught quarter long seminars in Cryptocurrencies, Artificial Intelligence and Philosophy, and Venture Capital.
Speaking In
12:45 PM - 1:30 PM (EDT)
Monday, June 14