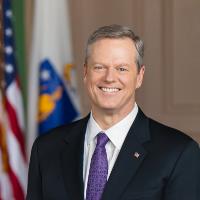 GOVERNOR OF MASSACHUSETTS, THE COMMONWEALTH OF MASSACHUSETTS
Governor Charlie Baker was sworn in for a second term as the 72nd Governor of the Commonwealth of Massachusetts on January 3, 2019, after a first term focused on moving Massachusetts forward through bipartisan, results-driven leadership.

Governor Baker has implemented an agenda that supports businesses of every size, in every sector, across every region of the Commonwealth. The Baker-Polito Administration has focused on sustaining Massachusetts’ core strengths: a highly skilled workforce, an environment that encourages and facilitates innovation, and vibrant communities. These strengths have driven significant economic growth and job creation. Prior to the COVID-19 pandemic, more than 200,000 new jobs were created since 2015, and unemployment had remained below 4% for more than three years.

Over the last several years, the Baker-Polito Administration has demonstrated a commitment to strengthening Massachusetts’ life sciences economy. Governor Baker signed a $623 million Life Sciences bill to refocus Massachusetts’ efforts on emerging needs, established a new cyber-security center at MassTech, worked with the Digital Health Council to advance the sector in Massachusetts, and partnered with the federal government to commit nearly $100M to advanced manufacturing research and development. Supplementing this work, the Commonwealth has used the Military Asset and Security Strategy Task Force to better link military installations to Massachusetts’ innovation economy and economic development activities.

As part of the Commonwealth’s response to COVID-19, in March 2020, the state worked with manufacturing and academic leaders to launch the Manufacturing Emergency Response Team (MERT), a collaborative effort to get Massachusetts manufacturers to pivot to make Personal Protective Equipment. This effort led to the production of over 15 million of pieces of PPE and other critical items being created, assisted by $16.1 million in state grant awards.

Throughout the economic recovery from the COVID-19 pandemic, Governor Baker will build on this successful track record to foster the clusters of the future. Promising opportunities include artificial intelligence, financial technology, robotics, and quantum computing, among other innovative fields surfacing every year. Effectively supporting these clusters and moving quickly to establish a talent and investment base is key to maintaining Massachusetts’ position as a center of cutting-edge research and development. The Commonwealth will also continue to build on its successful efforts to attract and support new and growing businesses.

Prior to his election, Governor Baker was a highly successful leader of complex business and government organizations, serving as a cabinet secretary to both Governors William Weld and Paul Cellucci, and leading Harvard Pilgrim Health Care, as CEO, from the brink of bankruptcy to one of the nation’s highest ranked health care providers.

Raised in Needham, Governor Baker and his wife Lauren reside in Swampscott, and are the proud parents of their three children, Charlie, AJ, and Caroline.
Speaking In
[On Demand]
Governor Baker’s Office