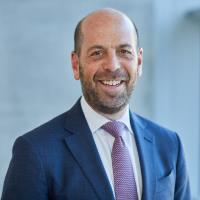 CEO AND DIRECTOR, REAL ENDPOINTS
New Jersey, United States
Jeff Berkowitz is one of the rare executives whose career has spanned most key verticals in global healthcare with executive committee and other senior roles at UnitedHealth Group, Walgreens Boots Alliance and Merck.
Jeff is currently the CEO of Real Endpoints, a leader in providing insights, support and tools to strengthen access to pharmaceutical innovation for an evolving healthcare landscape with a concentrated focus on value based arrangements, patient services and access support for biopharma and payors.
Prior to Real Endpoints, Jeff served as an Executive Vice President of UnitedHealth Group/Optum where he led Optum’s International division as CEO while also driving key strategic initiatives within Optum’s pharmacy benefits management division.
Prior to joining UnitedHealth Group/Optum in 2016, Jeff was a member of the Executive Committee of the Walgreens Boots Alliance where he served as President of Pharma and Global Market Access. In this role, Berkowitz was responsible for generic and branded procurement, inventory management, relationships with pharmaceutical companies as well as the companies pricing and reimbursement strategies with all payors and payor segments. Jeff was also accountable for the specialty pharmacy business with over $10 billion in revenue and 5,800 employees.
Before the formation of the Walgreens Boots Alliance, Jeff served as President of Walgreens Boots Alliance Development GmbH, where he was based in Bern, Switzerland for three years, with responsibility for the creation and development of a new joint venture company overseeing relationships with branded and generic pharmaceutical manufacturers. As the senior-most Walgreens executive residing outside of the U.S., Berkowitz led the global health and wellbeing efforts on the ground overseas.
Prior to taking on the role as President of the JV in mid 2012, Berkowitz served as the Senior Vice President, Pharmaceutical Development and Market Access and was responsible for all pharmaceutical procurement, inventory management, managed care sales, network contracting and reimbursement.
Before joining Walgreens in 2010, Jeff was senior vice president of global market access for Merck & Company, Inc. where he was accountable for all activity related to access, pricing, payer marketing, health outcomes and health technology assessments worldwide and a member of the Global Human Health and Emerging Markets leadership teams. From 2002 to 2009, Berkowitz held a variety of positions with increasing responsibility in market access, sales and marketing with Schering-Plough prior to its acquisition by Merck in 2009. His tenure there culminated in his role as group vice president of diversified products and global market access. In this capacity, he held global P&L responsibility for the company’s $2.5 billion diversified products franchises and was a member of the global management team. He also served as legal director for Schering-Plough’s managed care and commercial group from 1998 to 2002. Before joining Schering-Plough, Berkowitz was a health care attorney for the international law firm Proskauer Rose LLP in New York and Washington, D.C.
Berkowitz serves on the board of directors of several publicly traded companies including Lundbeck A/S, Esperion Therapeutics, Zealand Pharmaceuticals and Infinity Pharmaceuticals. Berkowitz also serves on the board of the non-profit, Project Explorer and served on the Board of Directors of the Swiss-American Chamber of Commerce. He has been recognized three times in the Top 100 in the Life Sciences by PharmaVoice Magazine and serves on the Editorial Advisory Boards of Life Science Leader and Pharmaceutical Commerce magazines.
Speaking In
[Available On-Demand]