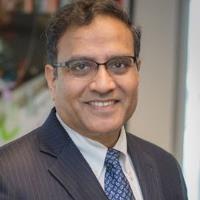 CEO AYUSHMAN BHARAT & NATIONAL HEALTH AUTHORITY, GOVERNMENT OF INDIA
New Delhi, India
Dr. Bhushan is an ex-Indian Administrative Service (IAS) officer of the Indian Civil Services, 1983 Rajasthan cadre. He holds a Doctorate in Health Economics and a Master of Health Sciences from the Johns Hopkins University, USA. He is an alumnus of the prestigious Indian Institute of Technology-Banaras Hindu University (IIT BHU) and IIT Delhi where he completed his B. Tech and Post-Graduate Diploma, respectively. He is also a Chartered Financial Analyst (CFA).

Dr. Bhushan is a bureaucrat-turned-economist with a career spanning 35 years across a multitude of sectors. He served for nine years in the IAS prior to leaving government service. Thereafter, he worked as Senior Economist with the World Bank Group prior to moving to ADB.

Until his appointment as CEO, AB - PMJAY, he served as Director General, East Asia Department of the Asian Development Bank (ADB). He has held multiple positions within ADB including Director General, Strategy and Policy Department and led ADB’s engagement with the People's Republic of China (PRC), Hong Kong, Republic of Korea, Mongolia, and Taiwan including management of $12.6 billion portfolio comprising of 113 projects. Dr. Bhushan administered and provided oversight to sectors like energy, environment, natural resources and agriculture, transport, public management, financial sector and regional cooperation, urban and social development. He also supervised ADB’s resident missions in the People’s Republic of China and Mongolia.

Dr. Bhushan lives in an empty nest in New Delhi, with his wife, Anjana, an ex-IAS officer, and works with the World Health Organisation (WHO). He has two daughters, Devika and Ambika, who are both medical doctors and live in the USA. He likes to play bridge and catch the latest movies and theatrical shows on the weekend.
Speaking In
[Available On-Demand]