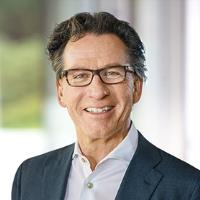 GLOBAL HEAD, PHARMA PARTNERING, ROCHE
James Sabry, Global Head of Roche Pharma Partnering, is responsible for bringing external innovation into the Roche Pharma Group, including Genentech, as worldwide Head of Business Development and Alliance Management. James is based at Roche’s Headquarters in Basel and is a member of the extended Roche Corporate Executive Committee.
Having grown up in Toronto, Canada, his career has spanned various roles in academia, biotech and the pharmaceutical industry.
He started out in healthcare with an M.D. from Queen's University in Kingston, Canada before completing an internship in internal medicine at Toronto Western Hospital. He then moved to Harvard Medical School where he completed a residency in Neurology. In 1989, he joined the Biochemistry Department at UCSF to complete his Ph.D. in Neuroscience in 1994.
After finishing his Postdoctoral fellowship in Biochemistry at Stanford University, James co-founded Cytokinetics, which he led as President and CEO until 2007. During that time, he grew the company from inception to more than 200 employees and took the company public in 2004.
In 2008, he became President and CEO of Arete Therapeutics, a company focused on the discovery and development of therapeutics for diabetes.
Two years later, James moved to Genentech to lead its Partnering organization. He then assumed his current role in August 2018, taking over the responsibility to head the combined Roche Pharma and Genentech Partnering team.
He is a member of the Scientific Advisory Board of Cytokinetics, Inc. In addition, he serves as a Board member for the Coalition for the Life Sciences and is also a member of the Board of Directors of Chugai Pharmaceutical Co., Ltd.
Speaking In
3:30 PM - 4:25 PM (PDT)
Monday, June 8