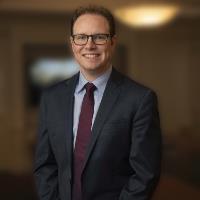 Wasserman analyzes the current political environment in lively and entertaining presentations that he can tailor to his audiences’ specific interests or locales. His data-driven forecasting looks at both national and local trends (if requested, he can even do a district-by-district outlook), the relationship between consumer brand loyalty and voting, and what the future holds for American elections. He is exclusively represented by Leading Authorities speakers bureau.

Highly-Praised Expertise. Nate Silver of FiveThirtyEight.com has written: “Wasserman’s knowledge of the nooks and crannies of political geography can make him seem like a local,” and the Los Angeles Times called Wasserman “whip smart” and a “scrupulously nonpartisan” analyst whose “numbers nerd-dom was foretold at a young age.” Chuck Todd, host of NBC's Meet the Press, recently called David "pretty much the only person you need to follow on Election Night."

In 2016, Wasserman drew wide praise for his accurate pre-election analysis, including his uncanny September piece entitled, “How Trump Could Win the White House While Losing the Popular Vote.” Leading Republican pollster Kristen Soltis Anderson concluded, “Nobody of my generation knows American politics as well as Dave Wasserman.”

Political Intelligence. Wasserman served as an analyst for the NBC News Election Night Decision Desk in 2016, 2012, and 2008 and has appeared on NBC Nightly News, ABC World News, C-SPAN Washington Journal, CNN, and NPR. He is a frequent contributor to FiveThirtyEight.com and his commentary has been cited in numerous outlets including POLITICO, the New York Times, the Washington Post, the Wall Street Journal, the Economist, and RealClearPolitics. In 2018, his groundbreaking interactive collaboration with FiveThirtyEight, the "Atlas of Redistricting," took top prize for News Data App of the Year at the Global Editors Network's Data Journalism Awards.

An enthusiast for data and maps, Wasserman served as a contributing writer to the 2014 and 2016 editions of the Almanac of American Politics. A frequent speaker and guest lecturer, he has shared insights into the latest political trends with audiences at Harvard's Institute of Politics, the Dole Institute of Politics, and the University of Chicago Institute of Politics – where he taught a seminar on redistricting and electoral geography and was named a Pritzker Fellow in 2019. Wasserman was also awarded “Best of Twitter” honors by Twitter in 2014 for his real-time election coverage.

Prior to joining the The Cook Political Report with Amy Walter in 2007, Wasserman served for three years as House editor of Sabato’s Crystal Ball, a widely respected political analysis newsletter and website founded by renowned University of Virginia professor Larry Sabato. In that role, Wasserman led the publication to correctly predict Democrats would score a gain of 29 House seats in November 2006.

A native of New Jersey, Wasserman holds a BA in government with distinction from the University of Virginia and was awarded the 2006 Emmerich-Wright Outstanding Thesis prize for his study of congressional redistricting standards.
Speaking In
4:40 PM - 5:30 PM (EDT)
Thursday, October 28