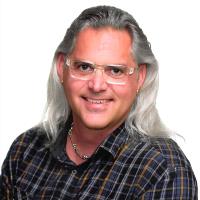 ALS PATIENT AND ADVOCATE
Dr. Robinson is originally from Canada and studied Medicine at Queen’s University in Kingston, Ontario, Canada. Dr. Robinson went on the specialize in Adult as well was Child & Adolescent Psychiatry. After doing a fellowship in Psychosomatic Medicine at Virginia Commonwealth University, Michael returned to Kingston, Ontario where he started clinical and research practice as an Associate Professor at Queen’s University. In 2004, Dr. Robinson moved to the US to join the Pharmaceutical Industry at Eli Lilly and Company as a Clinical Research Physician. While at Lilly, Michael had the opportunity live and work in Japan for a year. Dr Robinson transitioned into leadership roles and led the Clinical Drug Development teams in Psychiatry and Pain at Lilly. Dr Robinson moved to Abbive in 2013, where he held roles of Vice President for Global Therapeutic Areas, and later VP, Head of US and Puerto Rico Medical Affairs leading a team of roughly 400 people. During his career in the pharmaceutical industry he has developed and launched many drugs across a range of therapeutic areas. He has published 28 papers, 2 books chapters and has given numerous presentations around the world.

Dr Robinson was diagnosed with ALS in December 2015, and later retired from work in April 2016. Since diagnosis, Michael has engaged in ALS advocacy with the ALS Association, I AM ALS, ALS Action Canada, and Everything ALS. He sits on various committees including: IAMALS Clinical Trials Committee, the Platform Trial Patient Advisory Committee, Platform Trial Prilenia Steering Committee, Seelos Therapeurtics Patient Advisory Committee, Coya Therapeutics Patient Advisor, and an advisor to Nuro. In 2020, Dr Robinson was a patient fellow for the International Symposium on Motor Neuron Disease and ALS.
Speaking In
12:00 PM - 12:35 PM (EDT)
Thursday, October 28