November 23, 2015
The animal biotechnology industry received some exiting [but long-overdue] news late last week when the U.S. Food and Drug Administration approved the genetically engineered (GE) AquAdvantage® Salmon for sale in the United States, the first time a GE animal has been approved for food. 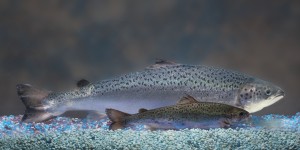 The fish, developed by Massachusetts-based biotech firm and BIO member AquaBounty Technologies, is just like other Atlantic salmon, but grows to normal size twice as fast as regular salmon, making the fish more cost-efficient and environmentally sustainable to produce.

The media coverage was comprehensive with articles in all the major outlets such as the Washington Post, the Wall Street Journal, the New York Times, USA Today, the Associated Press, Reuters, among others.

News articles talked about the benefits:

AquAdvantage Salmon is engineered by the Massachusetts-based company AquaBounty. Ron Stotish, the company’s CEO, said in a statement that the fish is a “game changer that brings healthy and nutritious food to consumers in an environmentally responsible manner without damaging the ocean and other marine habitats.”

And some articles dispelled some of the more common concerns about the GE fish:

Health & Safety:
Dr. William Muir, a professor of genetics at Purdue University who had urged the government to approve the salmon, said there is "no credible evidence" that these genetically modified fish are a risk to either human health or the environment.

Containment:
The larger issue is the possibility of escape, important because escapees could outcompete or interbreed with native fish. AquaBounty says it has several layers of safeguards to prevent that: The fish are raised on land, in tanks, and the fish grown for food (as opposed to breeding) are all females, and sterile. The FDA calls the possibility of the salmon’s escape “highly unlikely,” and the possibility of their breeding in the wild commensurately unlikely. Environmental conditions around the company’s Canadian and Panamanian facilities, the agency found, make it unlikely that any escapees could thrive and establish a viable population. (The FDA approval is for only those two facilities. Any new installations will require a new environmental assessment and separate approval.)

Labeling:
Susan Mayne, director of the FDA’s Center for Food Safety and Applied Nutrition, said the FDA can only require labeling of GMO foods if regulators find a “material difference” from conventionally produced versions, and “in the case of the AquAdvantage salmon, the FDA did not find any such differences.”

BIO applauded the FDA action calling it “a very important step in the right direction for the advancement of animal biotechnology innovation.”  BIO President & CEO Jim Greenwood said “animal biotechnology can improve livestock to require less feed, produce more protein, and reduce environmental impact, while also providing for enhanced animal health and welfare.  Other animal biotechnology applications can improve human health through faster discovery of cures, improved medicines and life-saving tissues and organs.” Such solutions can only be realized if the U.S. government approval process focuses on science and risk and avoids the political interference that plagues the salmon application.

AquaBounty's salmon was originally developed as a fast-growing variety by a group of Canadian public university scientists over a quarter of a century ago, and the company has been trying to get regulatory approval for almost two decades, said Dr. Alison Van Eenennaam of the University of California, Davis, who served on the 2010 FDA Veterinary Medicine Advisory Committee which looked at the AquaBounty salmon.

She called the FDA's five-year decision-making process on the fish "unprecedented" and said the approval was "long overdue." FDA policy analyst Laura Epstein told reporters that because the approval was the first of its kind, the agency wanted "to get everything right" and offer many opportunities for public comment.

One of the better media pieces on the issue appeared Nick Stockton’s November 20 article in Wired:

From their birth in freshwater lakes to getting caught in a fisherman’s net, it can take years for a wild salmon to wind up filleted and garnished with a lemon on your dinner plate. But for the Frankenfish that the FDA approved yesterday—the very first genetically modified organism declared safe to eat—the journey took more than 20 years.

It didn’t take that long because the science was hard. Researchers had already nailed down the genetic tweaks to bulk up the fish—technically called the AquAdvantage salmon—by the early 1990s. Starting with the genome of the Atlantic salmon, a heavily farmed species that’s nearly extinct in the wild, scientists made two changes. They took the gene for a growth hormone from the Chinook (or king) salmon, the largest of the Pacific salmon species, and kicked that hormone into overdrive with a promoter gene taken from ocean pout, an eel-like fish that can survive and grow in near-freezing waters. “Usually the salmon’s growth hormone gets turned off during colder months,” says Eric Hallerman, fish conservation scientist at Virginia Tech University. The pout’s promoter gene basically makes sure the Chinook growth gene never gets shut off. Voila: a mega-fish.

So why did AquAdvantage take so long getting to market? In part, because the government didn’t have a regulatory pathway for GM animals to become food at that time. Fish become food, which goes in your mouth, and the Reagan administration decided that modified animal foods fall under the FDA. That makes sense, because a modified animal could trigger some peoples’ allergies, and there have also been (mostly debunked) claims about GM organisms causing cancer. Those concerns have all been cleared up to the FDA’s satisfaction.

But the AquAdvantage also stoked environmental worries. For instance, what if this super fast-growing, fast-eating fish escapes and starts competing for resources with its wild cousins? Do you want extinction? Because that’s how you get extinction. You also don’t want GM fish and wild fish interbreeding, polluting the wild genomes with engineered sequences.

Traditionally, environmental concerns haven’t been the FDA’s problem. Which is why they sought out the expertise of people like Hallerman, who investigated the fish’s environmental risks for the agency. “The key issue is fitness of the organism,” he says. Fitness, as in Darwinian survival. Hallerman and his co-investigators looked at how well these fish competed for mates and created spawn relative to their wild counterparts. “We found that they are more stressed than non-GMO fish, which makes sense because they are putting all their energy into growth,” he says. But even though the fish’s fitness levels were low, they weren’t zero. “Their traces could still be passed along to another generation.”

The solution was to put the AquAdvantage in species-wide solitary confinement. Currently, the only place the FDA allows the company to grow fish are in aboveground freshwater tanks high in the Panamanian mountains. In order for a Frankenfish to compete or interbreed with wild salmon, it would have to escape the tanks1, somehow make it to a river, and swim down that river into the ocean. Salmon are cold water species, so it’d be tough to survive in the warm equatorial waters. Then the fish would have to swim thousands of miles to either North Atlantic or North Pacific. Not impossible, but in my book any fish that pulls off a feat like that deserves whatever food or sex it can get.

The FDA decision has implications beyond fast-growing fish. Researchers elsewhere have developed GM critters they hope will address food problems where traditional breeding has fallen short. For instance, goats with milk that doesn’t spoil so easy in warm weather. These are intended for poor countries, where refrigeration and pasteurization are scarce. Other examples include hornless cattle (for less-ouchy wranglin’) and pigs with extra-thick backsides.

How long? “Um, you would hope it’s shorter than 20 years,” says Alison Van Eenennaam, animal geneticist at UC Davis. “Otherwise I’ll be dead before it gets approved.” Unsurprisingly, she sees the FDA’s announcement as a boon to GM researchers. In fact, you could say it was downright benefishial.

AquaBounty’s information on the (GE) AquAdvantage® Salmon is posted online.
More on This Topic