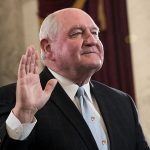 After significant delay, Perdue’s nomination hearing was held on March 23, and appeared to go swimmingly.  One week later, the Senate Ag Committee voted to favorably report the nominee to serve as the U.S. Secretary of Agriculture. Perdue is now awaiting confirmation by the full U.S. Senate.

"We strongly support the speedy confirmation of Governor Sonny Perdue as the next secretary of Agriculture," they wrote. "On behalf of our nation's farmers and ranchers, and all of rural America, we encourage you to complete this process this week."

The lawmakers pointed to the many issues facing producers right now, from nosediving farm income to avian influenza and the devastating wildfires in the southern high plains. They also noted that the Trump administration's recent "skinny budget" proposal, which called for deep cuts to agricultural spending in fiscal year 2018, was developed without input from an Agriculture secretary.

On issues related to ag biotech, having an Ag Secretary in place would further discussions on the forthcoming biotech food labeling disclosure rule and proposed revisions to USDA’s Animal and Plant Health Inspection Service (APHIS) biotechnology regulations (also known as the “340” rules).

Senate Ag Committee Chairman Pat Roberts has said: “Our farmers and ranchers have been waiting too long for this important position to be filled. We need to get Governor Perdue down to USDA to get to work. Rural America is ready.”

How much longer will rural American have to wait?  As Chris Clayton, reporter for DTN, points out:  “the odds of Perdue getting cleared before the Easter break seem slim.”  Then Congress recesses for two weeks, which means Perdue’s confirmation would come at the end of April at the earliest.

Some ag insiders believe the continuing delays represent President Trump’s lack of interest in the country’s agriculture sector, disregarding that the United States is a key exporter of ag goods and one of the main drivers of the U.S. economy.

“We farmers sometimes have an inferiority complex. We feel taken for granted considering what we produce is one of the most important things humans need.

“The long wait for a new secretary of agriculture hasn’t helped…. Whether intentional or not, it sends the wrong message: that agriculture just isn’t as important as other things.

“But I bet all 100 senators will eat a hearty meal today. They’ll just assume their food is plentiful and safe – and it is. To keep it that way, the men and women who grow our food, fiber and energy crops need an agriculture secretary on the job. Gov. Perdue is the right man for the job. The members of the Senate Agriculture Committee certainly think so; they’ve overwhelmingly approved sending Perdue’s nomination to the full Senate.”

Note:  Following publication of this blog, the U.S. Senate has scheduled a vote on the confirmation of Sonny Perdue to be Agriculture Secretary on April 24 at 5:30pm.
More on This Topic