April 3, 2017
Breaking Buzz is BIO’s newest blog series that reaches across the globe to bring an insider’s preview into the hottest international and partnering trends coming to San Diego for the BIO International Convention.


Running of the Biotechs

Spain is bullish on biotechnology thanks to a sweeping transformation that’s taken place over the last decade. Now, with a steady stream of fundraisings, partnerships and licensing agreements well underway, the country is reaping the rewards as they prepare to host the Spanish Pavilion at the BIO International Convention for the 14th consecutive year. Let’s take a closer look at how these transformations have developed, and what we can expect to see in San Diego.

The Entrepreneur Support Act offers a “patent box” regime that exempts 60% of net income coming from the transfer of intangible assets from taxation. It supersedes similar legislation that exists within the European Union because, according to the Spanish Foundation for Science and Technology (FECYT), “The affected intangible assets are not limited to patents, but extends to revenues coming from the transfer of models, designs, formulae, plans, or even, know-how.”

CDTI, the National Agency that supports business R&D through different funding programs, offers open opportunities to new biotechnology ventures with Neotec, a source for direct grants (up to 70% of the total budget) for the creation of new industry businesses; and Innvierte, an initiative that goes beyond funding and supports an entire ecosystem. In the biotech industry alone, Innvierte has committed to six VC private-public funds for a total of €260.7 million, with €54.6 million already invested in 49 ventures.

Joint US-Spain BIO Ventures is CDTI’s funding program which offers direct grants (up to 50% of the total budget) and preferential loans to support joint R&D collaboration projects between Spain and US entities (only the Spanish share of the joint project gets funded).

Representatives from these initiatives and other funding programs will be at the Spain’s pavilion this year, along with 60 Spanish-born biotech companies and universities, 22 of whom are new to the BIO International Convention; a fact that makes Maria Marshall, Assistant Director of the Trade Commission of Spain in Chicago, very proud. “We are happy that every year we have new companies, each willing to step out into new markets, continuing to grow in the international arena.”

Last year during the BIO International Convention in San Francisco Spanish delegates held about 1,800 scheduled meetings within BIO’s One-on-One Partnering System.  This year they’ll be running a similar course but with even higher expectations. To request a meeting or see a list of Spain’s exhibiting organizations click here. 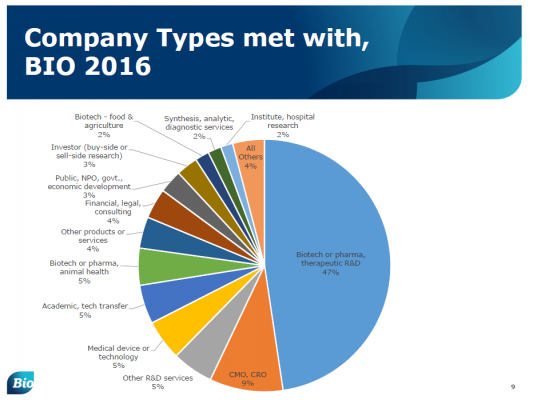 The interactive session will end with a networking reception at 11am where a delicioso brunch will be served. The location of this annual event will be announced soon.