By 2050, the global population will surpass 9 billion and require nearly a doubling of agricultural output to provide an adequate food supply. At the same time, the world's agricultural system will be increasingly challenged by water scarcity and climate change, raising the risk of production shortfalls in a world where over 800 million people are already undernourished. A challenge like this can be met through biotechnology, innovation, and appropriate agricultural development and trade policies.  At the State Department, we are working to encourage countries to think proactively about the role technology can play in addressing food security and climate change and about its strong potential as an engine of economic growth. Unfortunately, the lack of science-based regulations in many countries discourages innovation and adaptation and creates barriers to trade. 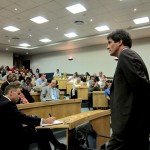 Biotechnology has created an array of tools to improve agricultural productivity, efficiency and nutrition over the last decade, from tissue culture to marker-assisted selection to genetic engineering, and concurrently reduced agriculture’s environmental footprint. It offers great potential to help developing countries reduce crop losses due to pests and disease, increase the nutrient content of crops and mitigate the effects of climate change. This is particularly relevant in Sub-Saharan Africa, where agriculture models have indicated that by 2050, average rice, wheat, and maize yields will decline by up to 14 percent, 22 percent, and 5 percent, respectively, as a result of climate change. Through Feed the Future, the U.S. global hunger and food security initiative, the United States is well placed to surpass the advances of the Green Revolution, and improve agricultural yields in an environmentally sustainable way.

On a recent trip to southern Africa, I was struck not only by what the technology has already done in countries like South Africa, but how much more it can do in countries like Zambia. In South Africa I spoke to the agri-business chamber about America’s role in encouraging science-based regulations in the region, and in Zambia I met with private sector companies as well as a number of countries in the COMESA region, where we outlined several areas where we can work together. I was particularly excited by COMESA’s work on developing region-wide guidelines for risk assessments for biotech products. By pooling resources, countries in eastern and southern Africa will be able to accomplish what no single country can do alone. By establishing a regional biotechnology framework that is transparent, predictable, and science-based, they will demonstrate their openness for investment while protecting people and the environment.

In 2011, the Department of State will devote some $500,000 to actively engage more than two dozen countries on the potential of biotechnology and the need for risk-based regulations. In partnership with the Department, experts from government, academia, and the private sector are engaging countries on the need for science-based regulations and developing alliances with those interested in the technology. If we each achieve our goal of reducing barriers to biotechnology and increasing innovation, both the United States and the rest of the world will prosper.
More on This Topic