July 31, 2014
Enacted in April 2012, the Jumpstart Our Business Startups (JOBS) Act makes the pathway to capital formation more attainable for small biotechnology companies, clearing the way for American innovation and ingenuity by removing bureaucratic hurdles and red tape to speed cures and medical breakthroughs to patients.

The JOBS Act reached a major milestone last week, with the 100th company going public under its provisions. On October 7th at the 13th Annual BIO Investor Forum, we will be hearing from the CEOs of some of those companies: their surprises, lessons learned, and advice for other companies thinking of going public using provisions of the JOBS Act. Early Bird registration is still available for those interested in attending. 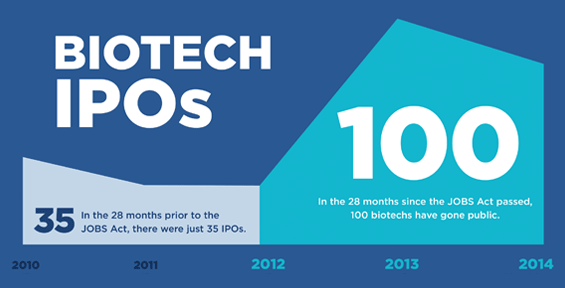 There’s been no shortage of biotech CEOs speaking out about how the JOBS Act has helped their company. Below is a collection of stories and opinion pieces discussing the JOBS Act from the perspective of some of the first 100 biotech companies that have gone public under its provisions.

“Biotech companies are conducting groundbreaking science and face a long and expensive development pathway. The JOBS Act was a game-changer for our company because it increased our access to investors and helped us to get our IPO done – allowing us to finance life-saving R&D.” – GlycoMimetics CEO Rachel King

“The regulatory relief gives us more of a practical road map to get your company to a point where your stocks are compliant” – Receptos Inc. CEO Faheem Hasnain

Already on an IPO high, biotech looks for a sequel to the JOBS Act, San Francisco Business Times, May 2, 2014

[Trevena CFO Roberto] Cuca said the JOBS Act definitely made a difference for Trevena — one of six local life sciences companies to go public in the past year. In addition to the extra time to educate investors, he said, Trevena has also benefited by exemptions on the regulatory requirements.

“We can maintain a smaller finance department than we otherwise would,” Cuca said. “And we’ve spent less money on consultants and outside support.”

Two JOBS Acts are better than one (commentary), San Francisco Business Times, May 23, 2014

“The JOBS Act (or Jumpstart Our Business Startups Act), which makes it easier to launch startups, seek investment and go public, has been a resounding success. According to a recent report by Thomson Reuters, IPOs are up 70 percent this year.” – OncoMed Pharmaceuticals CEO Paul Hastings

“My current company, Regulus Therapeutics Inc., was one of the first biotechnology companies to enter the public markets under the Jumpstart Our Business Startups Act — known as the JOBS Act — in October 2012. Since then, multiple companies have followed suit, and we saw a renewed enthusiasm in 2013 and 2014 to fund new technologies in the biotechnology space.” – Regulus Therapeutics Inc. CEO Kleanthis Xanthopoulos

Back in June, we released a video in which BIO Board Members and other CEOs shared their perspectives on the JOBS Act:

To register for the 2014 BIO Investor Forum, click here.