Biotechnology on the Ballot: Scaremongering vs. Progress

October 19, 2012
Microbiologist and science writer Alex Berezow writes for the Wall Street Journal that Prop 37 is a “scaremongering California initiative” that would be “another green blow to progress.” 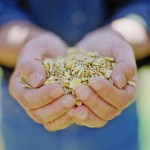 Berezow is quick to point out the many benefits of biotechnology (ringspot-resistant  papayas; high-yielding cotton crops; food crops that fight pests without insecticide; “Arctic apples,” which don’t turn brown after they are sliced; drought-resistant corn) and biotech’s promises that are currently waiting in the technology pipeline (a GMO cow that produces low-allergy milk; “Golden rice” containing more beta-carotene as a source of vitamin A; disease-resistant bananas; plants that are more proficient at sequestering carbon dioxide; malaria-resistant mosquitoes; bacteria that produce biofuel; and plants that synthesize edible vaccines).

Truly, the innovations of biotechnology appear to be limited only by our imagination. Yet strong opposition exists to this revolutionary technology. Anti-biotechnology groups frequently mislead the public about GMOs by playing down the known benefits while overhyping small, theoretical risks.

The result is that biotechnology is being held back by a scaremongering group of environmentalists who seem to think that saving the planet requires banning science and thwarting human progress.

In November, California will vote on Proposition 37, a referendum that would require food labels for GMOs. The Yes campaign is based on misinformation and fear.

The American Medical Association recently declared that “there is no scientific justification for special labeling of bioengineered foods.” Many other organizations recognize the benefits of GMOs, ranging from the National Academy of Sciences and the World Health Organization to the USDA and FDA.

There's a reason that respected scientists, medical doctors and government officials embrace GMOs: They understand the technology and its potential for revolutionary change. For a world population that will hit nine billion people by 2050, we need every tool in the arsenal to keep improving agricultural production and bring the developing world out of poverty.  Embracing GMOs is not only pro-science. It is also pro-humanity.
More on This Topic