Ten years ago this week, while still in shock from the unspeakable horrors of 9/11, Americans were learning of a new threat—bioterrorism. As it turns out, the anthrax letters of October 2001 were a relatively small incident, in which 22 were infected and five died. Other than the psychological aspects and the costs of cleanup (in excess of $500 million), the anthrax letters were on the scale of a truck bomb, not a weapon of mass destruction.

A decade later, however, three critical questions remain: Is large-scale bioterrorism a serious threat? Can we prevent an attack? If we cannot prevent a biological attack, can the nation respond effectively and mitigate its consequences? The WMD Center’s Bio-Response Report Card, released on October 12, addresses these very questions—providing an assessment of America’s current biodefense capabilities and recommendations to strengthen our nation’s bio-preparedness and response. 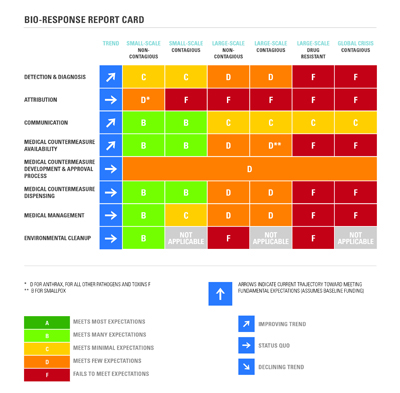 The report addresses the threat of bio-terrorism by examining three key additional questions: Do terrorist organizations and other non-state actors have the capabilities to produce and use bioweapons? Have they demonstrated intent to use biological weapons? Is the nation vulnerable to such attacks? The answers are disturbing—particularly in light of the fact that these questions (and their answers) are not well understood by many leaders in government—at the federal, state and local levels.

While prevention efforts are important, the biotech revolution has given terrorist organizations and other non-state actors the capability to produce and use powerful biological weapons—weapons once limited to superpowers. We believe America’s best defense against the threat of 21st century bioterrorism is robust response capability.

The bottom line on the threat--bioterrorism is the ultimate asymmetric weapon. Today the attacker has the technological advantage. However, America has the scientific and technical know-how to change the advantage from the attacker to the defender. These advances are within reach, but will require a renewed national commitment.

We hope the WMD Center’s new report will be useful as a starting point. Informed by many of the nation’s top biodefense, public health, and medical experts, it provides a strategic, end-to-end assessment of the nation’s current bio-response capabilities. We examined seven critical components of bio-response and measured each against a range of potential scenarios, from small scale to global contagion. (see: www.wmdcenter.org)

The report card contains 45 grades, ranging from Bs to Fs. Based on this evaluation, we then identified three strategic priorities for making improvements to the bio-response enterprise:

All three areas are fundamental to strengthening the response capabilities required to defend the nation against bioterrorism or a naturally occurring biological disaster. We strongly believe, however, that the availability of medical countermeasures is the linchpin of biodefense. For this reason, we believe highest priority should be given to sustain funding of purpose-driven science—especially for advanced development and regulatory science. A biodefense enterprise without adequate medical countermeasures is like an Army without bullets—it may look good on a parade ground, but has minimal value for national security.

In 2004, the 9/11 Commission asked the question, “what if the worst people in the world obtain the worst weapons in the world?” In 2008, the WMD Commission identified the worst (and most likely) weapon to be biological. Today, the WMD Center challenges America’s leaders to recognize this growing threat and to take proactive steps to ensure the availability of the medical countermeasures required for our national security.