August 20, 2015
Odds are the world’s deadliest animal is living in your home and you don’t know you are at risk.

We do our best each day to make smart decisions to protect ourselves, our friends, our families and our neighbors from serious harm. But there is one danger lurking in many of our homes which is going unchecked. 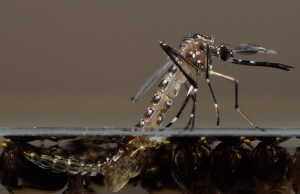 It beggars belief how a creature so small can be so dangerous, but mosquitoes kill one person every 12 seconds. And they do not respect privacy or boundaries.

One invasive species in particular – Aedes aegypti – has been unleashing a torrent of diseases on us – Dengue Fever, Yellow Fever, Chikungunya Virus, Zika Virus – and if you think it is a problem restricted to the tropics, I am sorry to tell you that it is spreading. For many of us, we are just as vulnerable at home as we are on vacation.

Aedes aegypti originated in North Africa but now is in more than 100 countries and is still expanding its range. It is in Europe and in the United States. In fact it caused a dengue outbreak in the Florida Keys in 2009, yet fewer than in 1 in 10 Americans are even aware of dengue according to a recent survey.

The burden of Dengue is second only to Malaria, and it affects nearly 1 in 2 people. Odds are you are going to be impacted by Dengue directly or indirectly in your lifetime. It is a terribly painful disease which can be fatal for children. And what is even more worrying is that there is no cure, no currently available vaccine, and no specific treatment of any kind. What’s more, the insecticides used to treat it are failing.

But you are not alone in the fight against this dangerous mosquito. Scientists have been working tirelessly on solutions.

Companies are racing to find working vaccines and to test them in clinical trials to see if they will work. But viruses mutate and new strains appear.

So the World Health Organisation recommends we control the mosquito itself. Fewer mosquitoes means less disease, and a spinout company from Oxford University has found a way to reduce the number of dengue mosquitoes to trace levels, in an eco-friendly way. In effect, the mosquito is used to control itself so beneficial insects like bees are unaffected.

The idea is similar to using genetic engineering to get bacteria to produce insulin to treat Diabetes, but instead of engineering bacteria, the mosquitoes are engineered so they cannot produce offspring. Friendly male mosquitoes are released, which are ‘sterile’ and do not bite. Using their natural reproductive instincts, the friendly males home in on females wherever they may be, and often where pesticides cannot reach. Their offspring die before they can reproduce and before they can transmit disease. With successive releases the pest population crashes. The fewer the mosquitoes, the more people are protected from the dangerous bite of Aedes aegypti.

The Oxitec ‘friendly mosquito’ is a non-toxic and pesticide-free approach that has been shown to work in dengue hotspots, reducing Ae. aegypti by more than 90% in every trial – well below the threshold for epidemic disease transmission.

When it comes to managing disease risk, prevention is often the best defense, which means deploying environmentally friendly mosquito control methods before there are new epidemics which healthcare systems will struggle to handle.

But the time it takes to get to the mosquito release stage in different countries is considerable because evaluation by independent experts and regulators is an important part of the process. Even so, more than 100 million Oxitec mosquitoes have now been released worldwide with no adverse effects on people or the environment.

For World Mosquito Day on August 20, we have an opportunity to strengthen our resolve to work together – scientists, governments, regulators, the public – all of us –  to put safeguards into place against mosquito-borne diseases while protecting our environment.

Over the last 50 years dengue has risen 30-fold – a virtually unchecked expansion of the disease. And rates of infection for other mosquito-borne diseases are also spiking. But with new interventions, that trend could soon start being reversed.