Development of a Novel Zika Vaccine with MVA-VLP Technology

May 5, 2016
Since the World Health Organization (WHO) first designated the Zika virus an international public health emergency on February 1, 2016, public health officials have become increasingly alarmed. On April 13 the Centers for Disease Control and Prevention (CDC) published a report in the New England Journal of Medicine, confirming the previous suspicions that Zika virus causes severe birth defects, including microcephaly – a condition where children are born with unusually small heads. The virus is also suspected of causing Guillain-Barré syndrome (GBS) a rare autoimmune disorder that can cause paralysis.

More than 60 countries and territories worldwide have reported local transmission of the mosquito-borne virus since 2007, with over 30 countries in the Americas reporting active transmission in the current outbreak. The WHO projects that the disease could reach most of the Western Hemisphere, infecting up to 4 million people, by the end of 2016. The CDC has issued a travel advisory for people traveling to regions within the Zika virus outbreak, which include popular vacation destinations. Brazil, the site of the 2016 Summer Olympic Games, is included in this advisory.

As the Zika virus continues to spread, there is rising anxiety among the general public, fueled in part by the horrific images of microcephalic babies born to pregnant women infected by Zika. This fear is justifiable, given the notoriously difficult prospect of controlling the mosquito which spreads the disease, the lack of specific diagnostics to confirm disease, and the fact that no vaccine exists to protect against the disease.

My company, GeoVax, is responding to the need for a Zika vaccine by developing novel vaccine candidates using our Modified Vaccinia Ankara – Virus-Like Particle (MVA-VLP) live attenuated vector platform, which has shown promise for HIV and Ebola vaccines. This replication deficient, viral vector (MVA) expresses antigens that self-assemble into VLPs resembling the target infection within the vaccinated person (Figure 1). 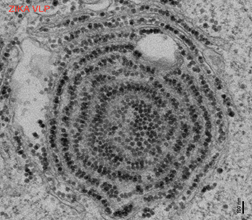 Figure 1.  Electron micrograph showing non-infectious virus-like particles (dark spheres) elicited by the GeoVax vaccine and about to be released from a cultured cell.

When released by the cell, these non-infectious VLPs mimic a natural infection, thus stimulating the antibody and T cell arms of the immune system to recognize, prevent, and control the target infection.  The result is a highly durable antibody response and antigen specific T cells.  Historically, MVA has an outstanding safety record – an especially important consideration when vaccinating pregnant women or women considering pregnancy.

Due to the sense of urgency for a Zika vaccine, we have formed a number of collaborations to speed the development process.  In working with the CDC, the University of Georgia Research Foundation and University of Texas Medical Branch the company will have access to convalescent sera and reagents for vaccine development, as well as multiple animal testing models.

We are confident that our industry will provide solutions to the Zika epidemic through the development of diagnostics, therapeutics and vaccines.  We believe our approach to the vaccine will result in a safe, effective and durable solution, and we are proud to be part of the effort.

GeoVax is a clinical-stage biotechnology company located in Atlanta, Georgia. In addition to its Zika vaccine development efforts, the Company is using its MVA-VLP technology for development of vaccines against HIV and hemorrhagic fever viruses (Ebola, Marburg, Lassa), and for use in cancer immunotherapy.