A single, strong voice for the biotechnology industry become a reality on July 1 when the Biotechnology Industry Organization (BIO), come officially into being. BIO was formed with more than 500 member companies, including the former members of the Association of Biotechnology Companies (ABC) and the Industrial Biotechnology Association (IBA), plus a number of companies that have joined since the announcement of the merger.

The other members of the newly formed Executive Committee ore Jomes Skinner, president of EDITEK, who will serve as chairman of the Emerging Companies Section, and Robert Beckman, president and CEO of lntergen Company, who will serve as vice chairman. Elected as officers at large were Forrest Anthony, president of AVID Therapeutics, Inc., and George Masters, vice chairman and chairman of the executive committee of Serogen, Inc. 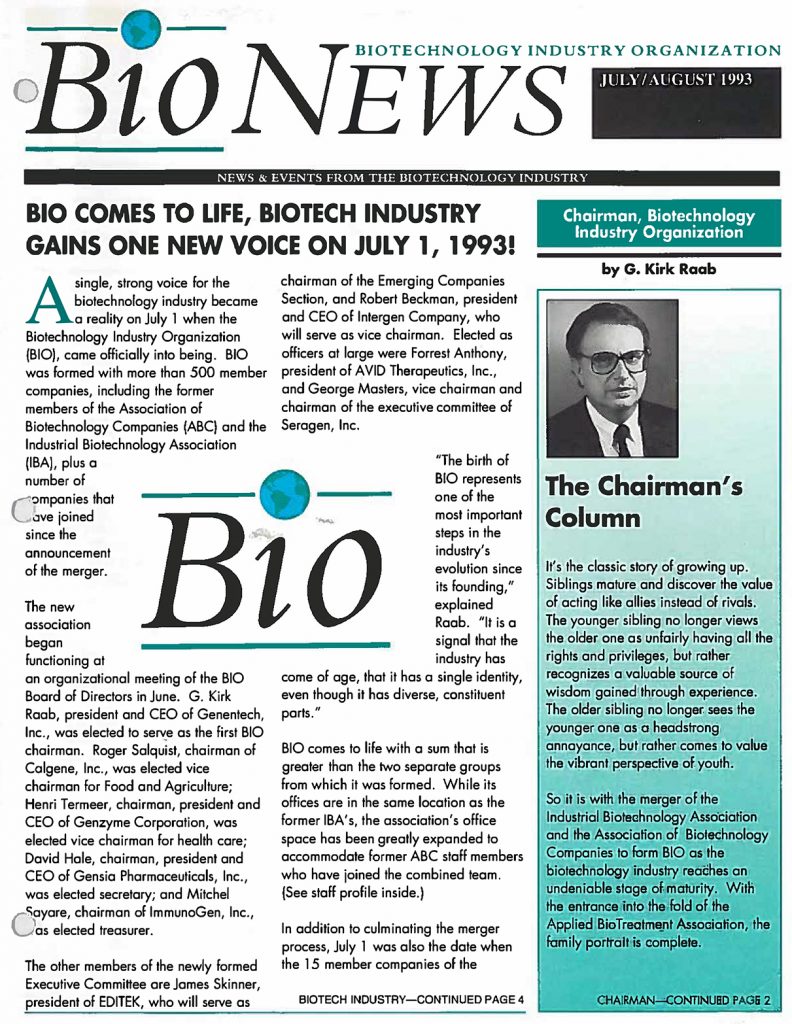 "The birth of BIO represents one of the most important steps in the industry’s evolution since its founding," explained Raab. "It is a signal that the industry has come of age, that it has a single identity, even though it has diverse, constituent ports."

BIO comes to life with a sum that is greater than the two separate groups from which it was formed. While its offices are in the same location as the former IBA's, the association's office space has been greatly expanded to accommodate former ABC staff members who have joined the combined team.

In addition to culminating the merger process, July l was also the date when the 15 member companies of the Applied Bio Treatment Association (ABTA), officially voted to dissolve and join BIO. With the addition of the companies from ABTA, BIO's membership now includes the leading companies in the health care, agricultural, environmental, diagnostics and services areas of the industry.

"We truly hit the ground running on July 1," explained BIO President Corl Feldbaum. "We have initiatives underway that will provide substantial benefit for the industry and, not to be shy about it, we intend to redefine the way a modern association serves its constituent industry. We're about to go through some very exciting times."

BIO' s Government Relations Department has initiated a survey on the capital crisis in the industry to generate data on how uncertainty in the health care reform debate has curtailed the availability of venture capital for small biotech companies. "We're developing the numbers to demonstrate how sensitive the industry is to public policy issues, and how easy it is for mixed messages out of Washington to affect the tempo and scope of biotech research and development," commented Chuck Ludlam, vice president for government relations. In the works is another BIO survey to identify and coordinate state, regional and interest group contacts and resources. According to Feldbaum, "We must be prepared to identify and address issues at the local, state and regional levels, so we can deal with them when they first arise, and at their point of origin. Local issues tend to go national fast because biotechnology, like it or not, is an extremely high-profile enterprise.”

"In direct support of our national, state and local outreach efforts, we have a very ambitious schedule of 81 visits with members of the Senate and House of Representatives before the end of the year," commented Ludlam. "We're going to take industry leaders in to meet with the congressional leaders who will determine the final shape of the health care reform package, of small business tax incentives and other issues of concern to biotechnology. BIO will carry our industry's message to Capitol Hill as it has never been heard before."

BIO, through its new Special Projects Department, has begun an active and expansive effort to reach out to patients' rights and advocacy groups. This effort has been initiated to generate support for biotechnology products from their ultimate consumers.  The Food and Agriculture Section has launched on effort designed to change the landscape of the debate about public acceptance of biotechnology food products. As a first step, the association provided training to a group of industry spokespersons to speak persuasively to general audiences about the benefits of biotechnology. The first of the two-day speaker's training workshops took place in Philadelphia on July 19 and 20.

The association has launched two new publications to take the place of the former IBA Reports, ABC Details and IBA News. The BIO Bulletin will become a biweekly report of late­breaking events and legislative and regulatory developments. It will be faxed to member company official representatives, communications, and government relations contacts. This expanded BIO News will be the monthly newsletter to cover association activities and feature stories of broad interest to the industry.

The Meetings Department is putting the finishing touches on the first BIO Annual Committees' Meeting, to take place September 22-24, 1993, at the Mayflower Hotel in Washington, DC. BIO will also hold its 8th Annual BIO International Meeting and Exposition to take place in Toronto, Moy 23-27, 1994.

In conjunction with the Fall Conference on September 21, the Health Core Communications Committee will host o workshop on developing educational outreach efforts as a means of building positive community relations.

This program will kick-off a major educational initiative developed to promote interest by young people in biotechnology careers. Informational kits on biotech careers will be mailed to 500 high schools nationwide this fall. These kits include a 9-minute video, a resource guide with job descriptions for entry-level jobs in the industry and a brochure that offers a description of the benefits of working in the industry.

All of this wouldn't have been possible without people like Tom Wiggens and Steve Duzan," Feldbaum said, "Everyone from both boards of directors who served on the joint committees, and oil of the members who mode this merger work deserve recognition. The best, believe me, is yet to come."
More on This Topic

One-On-One with Dr. George Scangos on COVID-19 and why the novel coronavirus is such a threat