“Get to Know” More About Land, Soil and GMOs

October 22, 2015
Throughout this month we’ve invited you to get to know more about GMOs, how the technology has evolved, to sustainable agricultural practices to the balancing act between producing food and protecting pollinators.

The availability of farmland is essential to agricultural production. Land use and soil health play a critical role in sustainable agriculture…In order for land to be used for agriculture, it must first be suitable for growing crops. Two of the characteristics that make land suitable for use in agriculture include healthy, well-drained and tillable soils, and land with access to adequate rainfall or fresh water for irrigation. However, because farmland is sometimes more valuable when converted into urban and suburban developments, agricultural acreage is shrinking by 50 acres every hour in the U.S. alone.

How are GMOs related to land use?

With an estimated world population of 9 billion by 2050, farmers will need to produce 70 percent more food over the next several decades to feed this many people. In addition, we’re currently consuming resources at a faster rate than what the Earth can produce or regenerate in a year. These challenges will require farmers to use all tools available to them to grow more crops for food, fiber and fuel without increasing inputs or acreage in agricultural production. GM crops are one of the tools available to help to grow food more sustainably, protect yields and contribute to food security. 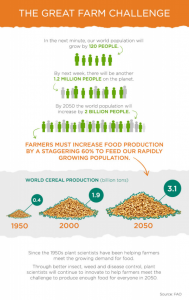 AFBF notes that currently available GM crops “are only the first in a pipeline that focuses on delivering high yields in tough environmental conditions” and that other GM crops “with novel genetic mechanisms for advanced drought tolerance are being developed, as are crops that can tolerate extreme heat, sunlight, and high levels of salt in the soil.”

According to CropLife International, more than a third of the world's potential crop production is lost each year to pests, such as weeds, insects and diseases. Access to agricultural technologies, like crop protection products and GMO crops, help farmers minimize yield loss from pests, and grow more food without bringing more land into production.

Growing Our Food Where It Grows Best

To explore this topic, let’s take a look at corn in the Midwest: 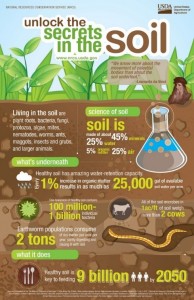 If you drive through the American Heartland this time of year, you'll see combines rolling through approximately 80 million acres of corn fields. In fact, the United States grows approximately one third of the world's corn. Why? Gary Truitt shares, “As Dr. Bob Thompson points out, the U.S. is the only place in the world that has the climate, soil, water, and topography to produce corn in the amounts we do. And it is a good thing we do because, without this level of production, the world — including the U.S. — would be a hungrier place.”

By growing crops where they are most suitable to grow, farmers can optimize production based on natural systems. This means that farmers can use the minimal amount of fertilizer, pesticides, water and fuel needed to produce a crop and protect or increase yields. These practices have a direct impact on protecting agricultural land, specifically in terms of soil health.

Katie Pratt, Illinois farmer and Ag blogger, echoes this concept and explains that “…there are reasons why certain things are grown in certain places.”

"We raise corn and soybeans, as do a lot of Midwestern farmers... Not only do we have the climate and soils to produce these crops well, we also have the infrastructure, market accessibility and workforce.”

Soil Health and What it Means

Healthy soils are the foundation of a healthy food production system and environment. From serving as a biodiversity powerhouse to contributing to carbon sequestration, healthy soils are critical to meeting the food needs of the future and keeping agriculture land productive.

Check out these five facts from CropLife International that will give you a new look at the soil beneath your feet: 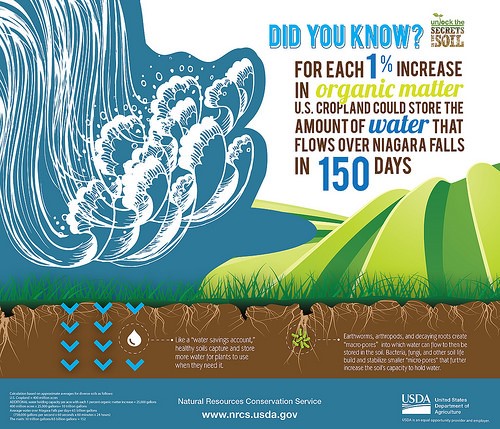 What role do GMOs play in soil health?

In our previous post, we discussed how GM crops help farmers make fewer pesticide applications, conserve water resources, manage fertilizer applications and maintain biodiversity. One of the most valuable benefits of herbicide resistant GM crops is that they assist farmers in adopting conservation tillage or no-till practices. Reduced tillage helps preserve organic matter in the soil, which has numerous environmental benefits.

Did you know that tilling releases carbon from the soil into the atmosphere, which can contribute to climate change? Reducing the need for tillage, as with herbicide resistant GM crops, can help reduce fertilizer use and therefore nitrous oxide emissions. EuropiaBio notes that "nitrous oxide has a global warming potential 296 times greater than carbon dioxide." By preserving soil health, farmers can also help protect our environment.

Some may think that GM crops negatively impact soil health, but GM crops interact with the soil similarly to other non-GM crops. For example, a common misconception is that GMOs harm insects and microorganisms in the soil. Dr. Nicholas Storer with Dow AgroSciences explains how insecticidal proteins from insect resistant GM crops can be released into the soil, but are not shown to have an effect on earthworms, springtails, nematodes, protozoa, bacteria and fungi. In fact, according to Storer, research shows that these proteins rapidly break down in the soil.

In addition, the herbicide glyphosate, which is often used with herbicide resistant GM crops, has not been shown to have adverse impacts on soil microbes.

The fact is that GM crops interact with the environment very much like their non-GM counterparts, and can benefit natural resources when used along with other sustainable agriculture practices. From helping farmers produce more food on less land to protecting and contributing to health agricultural soils, GM crops are a tool that will help feed the future.

Check back next week for our last post of the month debunking the common myths about GMOs! If you have additional questions, feel free to search our archives or submit a new question.
More on This Topic