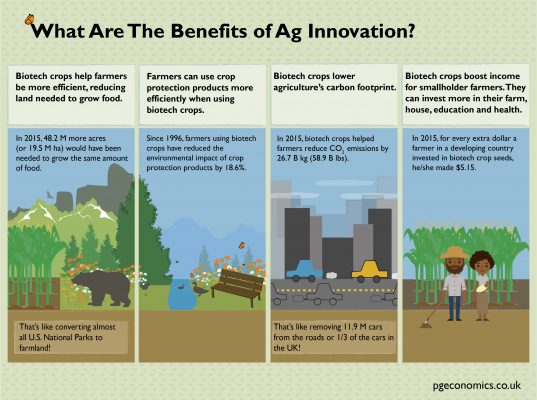 Jim Greenwood, President and CEO of the Biotechnology Innovation Organization (BIO), pointed out the significance of the report’s findings regarding biotechnology’s environmental contributions.

“The increased use of biotech crops has allowed farmers to grow more sustainably,” said Greenwood. “Without biotech crops, billions more kilograms of carbon dioxide would have been emitted in 2015 alone – the equivalent of adding 11.9 million cars to the roads. Additionally, these crops have reduced the need for crop protection products and enhanced soil quality.”

The PG Economics annual global impacts report quantifies the impact of agricultural biotechnology on the environment and on farmer incomes since biotech’s commercialization in 1996.

From 1996 to 2015, crop biotechnology has reduced spraying of crop protection products by 619 million kilograms, an 8.1 percent global reduction. As a result, farmers using biotech crops have reduced environmental impact associated with their crop protection practices by 18.6 percent.

Crop biotechnology has also helped farmers adopt more sustainable practices like reduced tillage, which decreases the burning of fossil fuels and retains more carbon in the soil, enabling significant reductions in greenhouse gas emissions. Had biotech crops not been grown in 2015, for example, an additional 26.7 billion kilograms of carbon dioxide would have been emitted into the atmosphere, the equivalent of adding 11.9 million cars to the road.

Not only has crop biotechnology improved sustainability, it has also provided huge economic benefits. For farmers using GM seeds, those benefits amounted to an average increase in income of $90/hector in 2015 - a net farm level economic benefit of $15.5 billion. From 1996 to 2015, the net global farm income benefit due to GM seed was a staggering $167.7 billion.

The highest yield gains continue to be for farmers in developing countries, many of which are resource poor and farm small plots of land. 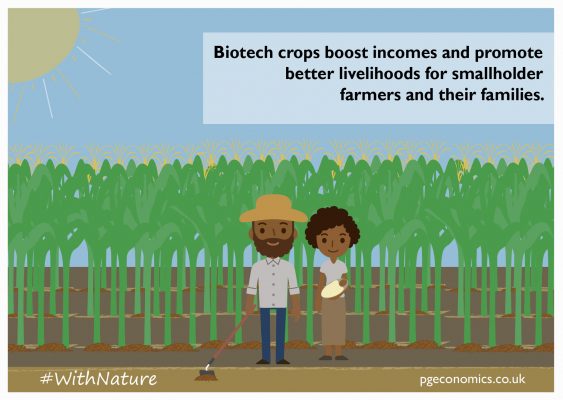