August 14, 2012
We are now more than eight months into the year and biotech indices have maintained their outperformance, squeezed out a modest size IPO class, and delivered double digit novel FDA approvals.

1. Indices. The Nasdaq Biotech Index (NBI) is up 27% Year to Date (YTD) as of last Friday. It was up nearly 20% by the end of the 1st quarter, consolidated during the 2nd quarter, and has participated in the summer rally to tack on another 7%. Here is how the NBI performance compares to other indices so far this year: (source: Factset) 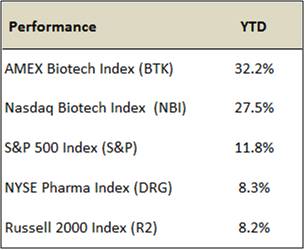 2. IPOs. The recent rally in the big names driving the index has yet to translate into a robust IPO market for small biotechs, but we are only two-thirds finished with the year. With 15 companies on deck with public S-1s and a number that have filed confidentially, IPOs could climb beyond the 12 IPOs we had last year. 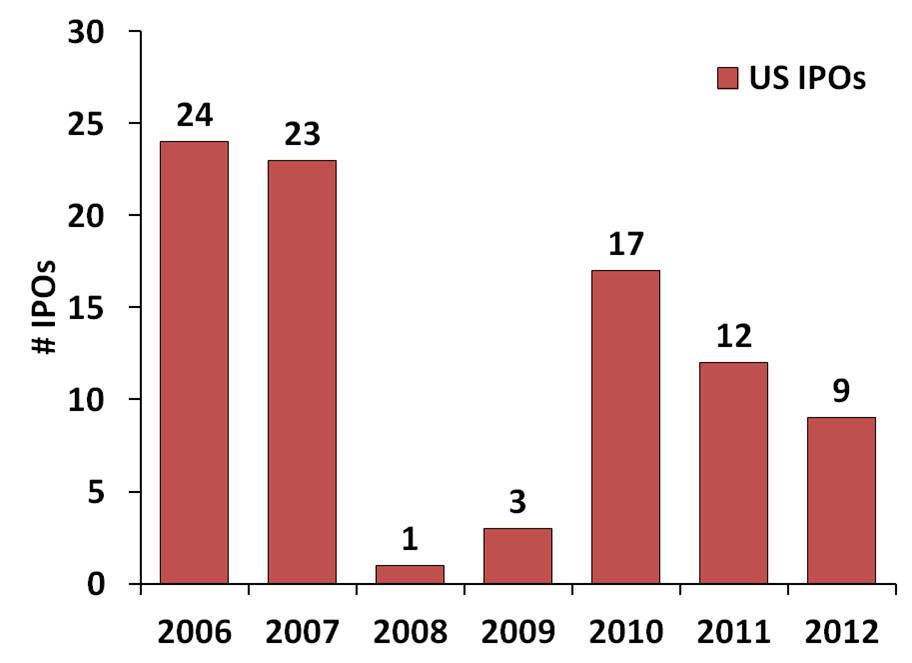 The nine biotech IPOs in 2012 have, on average, raised 20% below their original filing amount. While that is better than the class of 2011, which raised 26% below filing amounts, it is not robust and is keeping some companies on the sidelines.  We continue to see companies holding off due to "market conditions" (most recently Stemline, and a few months back Cancer Genetics, Rib-X).

The average performance since IPO date for the class of 2012 comes in at 17% due to the doubling of Supernus (SUPN). Otherwise, it is a mixed IPO class, with four stocks down and five up, and a median performance of 3.5%. (source: Factset)

When including biotech IPOs of 2011, we find some positive trends as discussed in recent articles from Bruce Booth and Luke Timmerman. Both authors point to "outperformance" of the Biotech IPOs vs. Tech IPOs since January. For example, biotechs such as Endocyte (ECYT), Pacira (PCRX), and NewLink (NLNK), Supernus (SUPN) are up over 40% since their IPO, whereas Facebook (FB), Groupon (GRPN), and Zynga (ZNGA) are down more than 40%.

3. FDA Approvals. As of Friday, we now have 18 novel drugs approved in 2012. The two most recently approved drugs fall into the "novel" category even though the active molecular entities have been around for years: Vascepa from Amarin (AMRN) is an ultra high concentration of fish oil lipid omega-3, and Talon's (TLON) Marqibo is a chemotherapy compound shrouded in a lipid matrix.

June and July saw some of the biggest success stories of the year when drug developers Arena (ARNA) and Vivus (VVUS) acheived the first new FDA approvals for obesity in over a decade. For more on these approvals, have a look at these articles from BioCentury, Bloomberg , Xconomy, and Fierce Biotech.

Here are the 18 novel approvals listed by date, with the six biologics in green. (Note that approvals for secondary indications, label expansion, or incremental changes in formulations are not included. For example, the recent approval of Regeneron's Zaltrap for cancer is for the same fusion protein (aflibercept/Eylea) approved for wet AMD in 2011 and is not included):