January 10, 2012
2011 ended quietly for the US biotech IPO market. It has now been almost two months without a biotech IPO. The last few IPOs back in November continued the theme that was in place at the beginning of the year - you can get out, but with a -30% haircut. In fact, only two of the 12 IPOs in 2011 raised more than they filed for. This is shown in chart 1 below.

The two companies evading the haircut are not your typical emerging biotech drug companies. One is Sagent, which actually sells 22 marketed generic drugs, a specialty pharma company. It makes it into our coverage here due to its small size, biotech commercial overlap, and 46 ANDAs in the pipeline. The other is Solazyme, a bio industrial company focused on converting plant sugar into oil. This is the 4th bio industrial IPO for the recent IPO window, coming in after Codexis and Amyris in 2010, and Gevo in 2011.

Since the 2009 Cumberland IPO, no pure-play drug biotech has made a debut without a discount to the offering price. 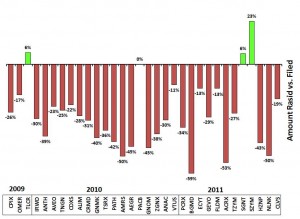 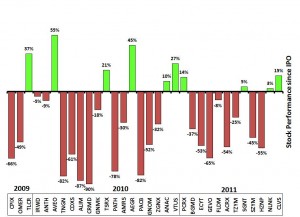 So far, the IPO picture is still generally negative for biotech fundraising. However, in terms of the number of companies that are exiting from the private to the public realm, biotechs are actually on track with the last US IPO window of 2003-2007. The total number of US IPOs since 2009's Cumberland IPO is 31, compared to 30 at this time back in 2005. That averages out to a rate of one IPO per month for both time periods. With 22 companies "on deck" for a public offering, biotech IPOs could easily match this trend in 2012. 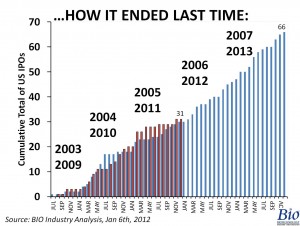