On Monday at the BIO World Congress on Industrial Biotechnology, Jonathan S. Wolfson, Chief Executive Officer of Solazyme, received BIO’s George Washington Carver Award. The Award was given during the Lunch Plenary Session titled State and Regional Approaches to Developing the Biobased Economy & George Washington Carver Award for Innovation in Industrial Biotechnology Presentation. The Governor of Iowa, Terry Branstad, and BIO’s Executive Vice President of the Industrial & Environmental Section, Brent Erickson, honored Wolfson with heartwarming remarks and commented on how his innovative work has contributed to the growth of the industry. 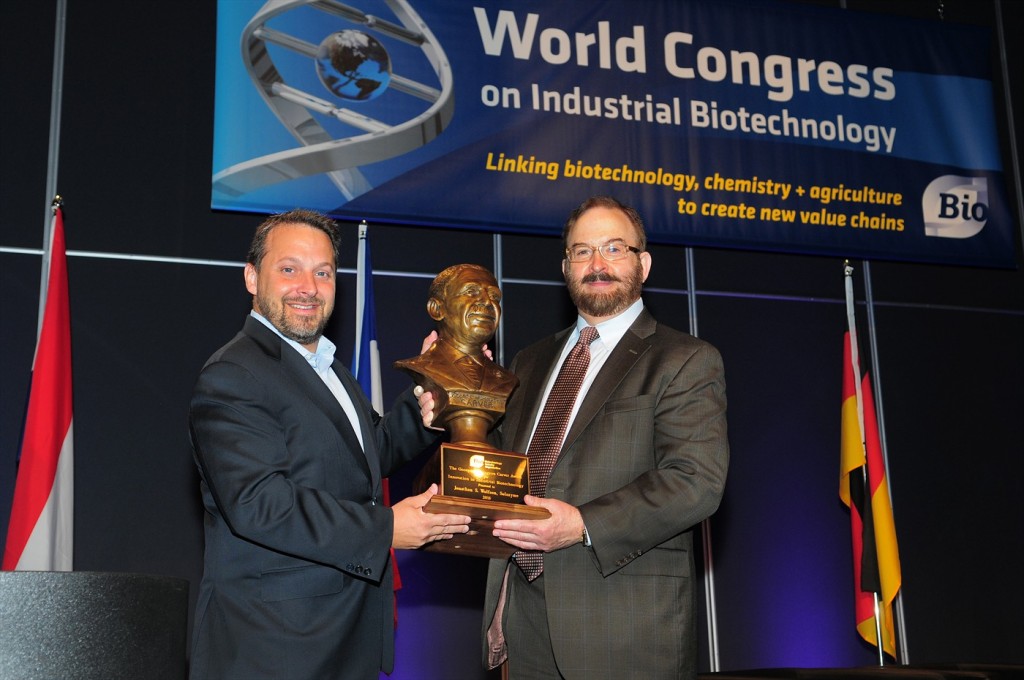 “There is no one more deserving to receive this award…He parallels George Washington Carver, one of our countries leading pioneer inventors and researchers in alternative foods”- Terry Branstad

Solazyme’s technology uses microalgae to make fuels, food ingredients, oils and more. Wolfson stated in his speech that his co-founder and him were in their freshman year at Emory College and dreamed about one day starting up a biotechnology company. He thanked his colleagues, co-founder, investors and partners—but also made a point to recognize that the true hero is not himself, but is the technology:

“What has gotten me out of bed over the last 12 years with a spring in my step is that our world needs what we, collectively in this room, are doing. Our planet needs to feed, clothe and fuel over 9 billion people in a few short decades in a much more sustainable way than what we are doing now.”

He reiterates the importance of staying positive and how optimism is needed to help change the world for the better. He closes his speech by saying that “it’s worth it,” and that hard work does pay off and biotechnology will thrive.

BIO CEO Jim Greenwood then introduced the panelists for State and Regional Approaches to Developing the Biobased Economy. Panelists included:


The panel focused on the current state of the industry as it pertains to their companies. They each shared a key characteristic about the state of the industry and described funding, incentives and mandates in place which help biotech flourish. Then the panel was opened up to the floor for questions. For example, Tyler Whale, President of OAFT was asked how Canadian policies influence the biotech industry and what are the “big trends” that you see happening which could influence the industry:

“7 out of 10 of the largest chemical companies in the world have operations in Ontario, so there must be something right with policy. Some of those policies are things like the Greener Diesel Mandate or the Minimum Ethanol Requirement, similar to the Renewable Fuels Standard”

To learn more about Brazil’s policies, Europe’s state of the industry and Illinois success in biotech, you can watch the panel with your own eyes: