March 17, 2016
In 2000, President Clinton officially dedicated March as National Colon Cancer Awareness Month. Since then, it’s grown to be a rallying point for the colon cancer community, as thousands of patients, survivors, caregivers and advocates join together to spread awareness and raise funds for the cause. The nation's oldest and largest nonprofit dedicated to the disease, the Colon Cancer Alliance, is encouraging everyone to support National Colon Cancer Awareness Month so the disease can be knocked out of the top three cancer killers. 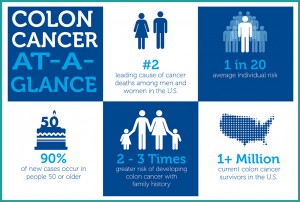 Colon cancer is the third most commonly diagnosed cancer and the second leading cause of cancer death in men and women combined in the United States. On average, the lifetime risk of developing colon cancer is about one in 20 and this year it’s estimated that more than 130,000 Americans will be diagnosed with colorectal cancer and nearly 50,000 will die from the disease. Despite these numbers, it’s one of the most preventable and, if found early, most treatable forms of cancer.

A simple test could save a life:

• Colon cancer often has no symptoms until it's at an advanced stage. In many cases, timely screening can prevent cancer by finding and removing polyps before they become cancer.

• While rates for colon cancer in adults 50 and older have declined, incidence rates in adults younger than 50 have been increasing.

• There are more than one million colon cancer survivors in the United States. Since the mid-1980s, the survival rate has been increasing, due in part to greater screening awareness and improved treatment options.

Ways to Get Involved in National Colon Cancer Awareness Month:

• Know the facts about colon cancer to be a beacon of hope for those who have questions. Talk to friends and family about the screening options and the importance of getting checked. Watch this new video to learn more about screening methods.

• Get your blue on! Shop the Colon Cancer Alliance online store for blue star items that support the organization’s mission to knock out colon cancer.

• Show off your best blue shots in the Colon Cancer Alliance Get Blued! Photo Contest. The winner of each category will receive a Blue Swag Bag filled with awareness items to help you spread the word.

• Host a fundraising or education event. You can also register for annual Undy Run/Walk and Scope It Out events. Throughout the year, the Colon Cancer Alliance hosts 25 fundraising Run/Walks throughout the country.

For more information about Colon Cancer Awareness Month, or to find events and ways to get involved, visit coloncancermonth.org.
More on This Topic