A Milestone for America’s Patent System 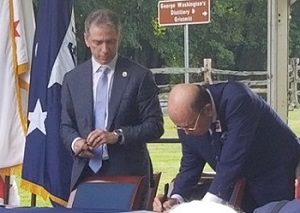 “Innovation has been the life blood of this country since its founding,” said Secretary of Commerce Wilbur Ross earlier this week in a press release announcing the 10 millionth patent issued by the United States Patent and Trademark Office (USPTO).

Strong, reliable and enforceable patent laws are the drivers of the biotechnology innovation ecosystem. Without these strong patent rights, the financing to take revolutionary biotechnology discoveries from the lab to the patient, farmer, or consumer would be unavailable. The weakening of these patent rights threatens new investment in the innovation sector of our economy and, with it, the jobs and industries of the future.

Toady in The Hill, BIO’s President and CEO Jim Greenwood addressed our industry’s concerns regarding the deficiencies within the USPTO that have weakened the our patent system that have led to the U.S. Chamber of Commerce to rank our patent system as only 12th in the world, behind nations like Singapore, France, and South Korea.

Read the full Op-ed here.
More on This Topic