January 17, 2018
BIO's Industry Analysis team has released its first report in a new series on the state of innovation in highly prevalent chronic diseases. 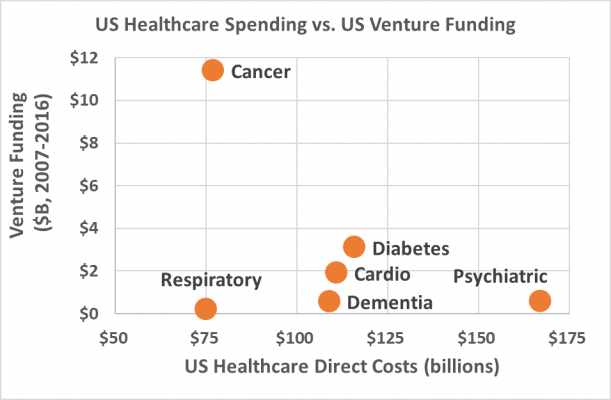 The persistence of this trend could have implications for the future output of innovative medicines in these disease areas. The cause for concern is magnified by the impact these chronic disease areas are having on the overall healthcare system (as shown in $ Billions in the figure above).

Depression, the first in a series of reports on the current funding and R&D landscape of highly prevalent, chronic diseases, takes an in-depth look at the state of innovation in depression therapeutics. As one of the most prevalent psychiatric disorders, depression impacts 16 million patients in the United States and is estimated to cost our health care system $105 billion annually.

The report is available for download here, where you can also sign up to receive future BIO Industry Analysis reports as they are released.


The next report in the series will focus on pain and addiction. Opioids will be covered in the report and a special session on the opioid epidemic will be featured at the BIO CEO & Investor Conference next month, February 12-13 in New York City. The session will explore the most promising avenues in the neuroscience of addiction and alternatives to opioid-based pain management, as well as identify the most pressing bottlenecks in our understanding of the brain’s addiction to painkillers. Register today!
More on This Topic