The New York Times Weighs in on Golden Rice Destruction 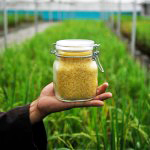 Amy Harmon wrote for the New York Times about the August 8 attack and destruction of the genetically modified Golden Rice fields in the Bicol region of the Philippines:

Had the plants survived long enough to flower, they would have betrayed a distinctly yellow tint in the otherwise white part of the grain. That is because the rice is endowed with a gene from corn and another from a bacterium, making it the only variety in existence to produce beta carotene, the source of vitamin A.

The concerns voiced by the participants in the act of vandalism - that Golden Rice could pose unforeseen risks to human health and the environment, that it would ultimately profit big agrochemical companies - are a familiar refrain in the long-running controversy over the merits of genetically engineered crops.

They are driving the desire among some Americans for mandatory “GMO” labels on food with ingredients made from crops whose DNA has been altered. And they have motivated similar attacks on trials of other genetically modified crops in recent years: grapes designed to fight off a deadly virus in France, wheat designed to have a lower glycemic index in Australia, sugar beets in Oregon designed to tolerate a herbicide, to name a few.

But Golden Rice, which appeared on the cover of Time magazine in 2000, is unlike any of the genetically engineered crops in wide use today, designed to either withstand herbicides or resist insect attacks, with benefits for farmers but not directly for consumers.

Not owned by any company, Golden Rice is being developed by a nonprofit group called the International Rice Research Institute with the aim of providing a new source of vitamin A to people both in the Philippines, where most households get most of their calories from rice, and eventually in many other places in a world where rice is eaten every day by half the population. Lack of the vital nutrient causes blindness in a quarter-million to a half-million children each year. It affects millions of people in Asia and Africa and so weakens the immune system that some two million die each year of diseases they would otherwise survive.

The destruction of the field trial, and the reasons given for it, touched a nerve among scientists around the world, spurring them to counter assertions of the technology’s health and environmental risks. On a petition supporting Golden Rice circulated among scientists and signed by several thousand, many vented a simmering frustration with activist organizations like Greenpeace, which they see as playing on misplaced fears of genetic engineering in both the developing and the developed worlds.

At stake, they say, is not just the future of biofortified rice but also a rational means to evaluate a technology whose potential to improve nutrition in developing countries, and developed ones, may otherwise go unrealized.


“It is long past time for scientists to stand up and shout, ‘No more lies - no more fear-mongering,’ ” said Nina V. Fedoroff, a professor at the King Abdullah University of Science and Technology in Saudi Arabia and a former science adviser to the American secretary of state, who helped spearhead the petition. “We’re talking about saving millions of lives here.”

Click here to read the full article that appeared in the August 24 edition of the New York Times.

Click here to read more on this issue.
More on This Topic