Mr. Chairman, thank you for the invitation to be here this evening. It is, indeed, a great honor. For 182 years, the Oxford Union has shown the world what civil discourse looks like. I wish I could say the same about this year’s U.S. presidential campaign. 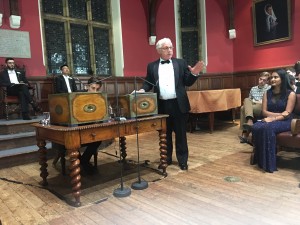 I began my career working with children who had intellectual and emotional disabilities. Many were poor and had been abused by their parents. Part of my job was to ensure that they had access to medicines to treat depression, bipolar disorder, psychosis, epilepsy and other illnesses. I witnessed the extraordinary improvements these medicines made in their lives. This informed my conviction that the pharmaceutical industry has both a unique ability and responsibility to help millions of patients in need.

This evening, we gather at this storied university to debate your proposition that “Big Pharma prioritizes profits over patients.” I contend this construct presents a false dichotomy – that what is actually required is for our industry to balance the imperatives to earn revenue and to provide patients with access to the medicines they need. I will argue that it has been profit-driven, competitive markets that have unleashed decades of astonishing medical innovation and that give us our best hope to deliver tomorrow’s even more astonishing cures. For there are two sets of patients to consider as we debate the role profits play in medical innovation: those seeking affordable access to today’s treatments and those who pray for new medical miracles to come.

Tonight, I will argue three points: First, a unique American social compact has enabled
U.S. pharmaceutical companies to deliver more new medicines than the rest of the world combined. Second, profitable Big Pharma is the mighty locomotive that powers our innovation train by providing small life sciences companies and their investors some measure of confidence to take huge risks they otherwise wouldn’t. Third, no other engine could deliver such precious cargo: hundreds of new medicines that save lives and save societies trillions of dollars in avoided health care costs.

On my first point: the American social compact between our industry and those we serve… Competitive markets are the foundation of the world’s most successful economies. There is no system on Earth more effective at unleashing the full measure of human potential. It is precisely because the biopharmaceutical industry’s products can mean the difference between life and death that we don’t abandon this conviction when it comes to medical innovation.

Here’s our compact: Pharmaceutical companies that innovate and deliver value for patients are rewarded for doing so by the market but only for a finite period of time. A time-limited period of market exclusivity allows drug makers to incur substantial risks in developing new products and to collect revenues for future innovation. Our unique free-market system enables American companies to deliver 57 percent of all new medications worldwide. 57 percent!

But once the patent expires, the medicine becomes a societal good – a commodity that can be sold at a dramatically lower price for decades to come. Today in America, nine out of 10 prescriptions are filled with low-cost generic medicines. Our industry also works with insurers, government and foundations to provide a vast array of safety net programs to get newer, branded drugs to tens of millions of patients who have a limited ability to pay.

Here’s what else experience has taught us: Government-imposed price controls are the surest way to drive away the investors who finance global medical innovation. When Hillary Clinton tweeted that, if elected, she might support government price controls on medicines, biotech stocks plummeted, losing $132 billion in market value in a matter of days. Now, she was rightly outraged that Turing had increased the price of an AIDS medicine by more than 5,000 percent, simply because it could.

Indeed, the recent actions of a few outlier companies have sparked a public backlash that threatens our entire industry and the patients we serve. As a result, Congress is considering – and our industry supports – new rules to accelerate generic competition, so generic manufacturers can profit by bringing cheaper alternatives to market.

The answer lies in harnessing the profit motive, rather than assaulting it, because if we encourage politicians to impose price controls, it is patients who will suffer. Economists Joseph Golec and John Vernon have calculated that if the United States had European Union-style price controls in place, we would’ve produced 117 fewer medicines over a span of 18 years. Think how much suffering that represents. This is why profits versus patients is a false choice. Profits empower innovators and investors to help patients in a way no other incentive can.

My second point: What exactly do I mean in saying that Big Pharma is the locomotive that powers our innovation train? Basic economics tell us that to attract sufficient investment,
an industry’s returns must be commensurate with its risks. The biopharmaceutical industry is among the most hazardous sectors for investment. Our projects have a 90-percent failure rate.

Therefore, investors require a strong return when they do finance a success. Their confidence in our industry’s ability to deliver healthy profits for a small number of winners fuels the entire system. Big Pharma gives them the confidence to make that gamble. Big Pharma’s financial resources, infrastructure, and track record of success pulls investment across the life sciences ecosystem from academic research centers, through venture capital firms, to small innovative biotech companies that discover most innovative new medicines.

Patients depend on Big Pharma to finance the most costly part of the drug development process – human trials. These companies’ profitability determines whether they can afford to spend hundreds of millions of dollars to conduct clinical trials for a new cancer drug or
a promising Alzheimer's therapy, knowing that most trials will fail. Last year, the U.S. Food and Drug Administration approved 48 new medicines. While a majority of those treatments were initiated by small companies, it was Big Pharma that brought 41 of those 48 medicines across the finish line.

Nine out of 10 U.S. biopharmaceutical companies don’t earn a profit at all. Yet our industry ranks first in research and development as a percentage of sales. Globally, our industry reinvests 20 cents of every dollar into creating the next generation of treatments and cures.

Some argue that governments should take the place of the pharmaceutical industry. But in recent history, there is not a single example of a government entity taking a medicine all the way through the R&D process and securing its approval for sale. Public monies focus on basic research and provide a mere fraction of the investment required to deliver new therapies.

Last year alone, the private sector spent $150 billion on biopharmaceutical R&D – nearly quadruple what all EU governments spend on medical research combined. Big Pharma, not big government, powers the ecosystem responsible for turning research in the lab into products on the pharmacy shelf.

My final point: Our innovation train delivers precious cargo that’s saving lives and societal costs. Thirty years ago, an HIV diagnosis was a death sentence. Thanks to the pharmaceutical industry, a 20-year-old who tests positive today can expect to live into his or her 70s, a life expectancy comparable to a person without the disease. In the United States, we’ve prevented nearly a million premature AIDS deaths and saved our economy $1.4 trillion.

Our industry has helped America achieve a 22-percent decrease in our cancer death rate over the last 25 years. This has saved the U.S. economy an estimated $2 trillion by reducing hospitalization and surgeries, extending lives, and increasing workforce productivity. Just this past year, nearly half of all U.S. approvals were for medicines that treat rare diseases. This included cancers of the brain, blood, skin, lung, and breast, as well as colorectal cancer and multiple myeloma.

How did we do it? It used to be that companies could not afford to invest in developing drugs for diseases that affected small patient populations. The economics didn’t work. Then Congress passed the Orphan Drug Act. It provided generous incentives to initiate research and fund clinical trials. In other words, they increased the odds that rare disease innovation would be profitable. The result: 400 new orphan drugs that treat rare diseases have been approved since the law passed, compared to just 34 prior to the law’s enactment. Thousands of patients have been spared suffering and returned to good health.

In conclusion, the pharmaceutical industry is proud of our unmatched record of medical innovation, and we’re clear-eyed about the role competitive markets have played in enabling us to achieve it. Reasonable people can disagree on how to strike the proper balance between today’s patients and tomorrow’s cures. What is beyond dispute is that restraining profits restrains medical innovation, and when we go down this road, it is patients who pay the price.

But if we nurture and build on the system that’s developing miraculous new cures, there is no disease we cannot conquer.
More on This Topic